Part of what makes good research is using the latest, up-to-date information. In today's fast-paced information environment, publications and reports that are even a year old can be outdated, especially if they are discussing legislation.
How do you keep up with new publications on topics that interest you? It turns out that a variety of tools are available. Some people customize their Google News page, while others monitor blogs or RSS feeds. If you're a Twitter user, have you ever thought to build a Twitter list to monitor new developments?
Creating Twitter lists is a great way to distill your Twitter feed into useful, subject-oriented feeds. Viewing a list on Twitter shows you only the tweets of the Twitter users included on that list, and can be helpful if you follow a wide variety of people or organizations.
Instructions for building a Twitter list are here. You do not have to organize everyone you follow into a list, and you can create as many or as few lists as you like. At no point do you lose the ability to view your normal feed, which shows you the tweets of everyone you follow.
Here's an example of a list we built for our own use at the library. After the end of the 83rd Regular Session, we wanted to make sure we didn't miss any of the session wrap-ups that state agencies, boards and commissions often publish to summarize legislation in their area. Not all of these entities are on Twitter, but many are, and they are pretty good about tweeting new information related to their agency. We located their Twitter accounts, and organized them into a Twitter list named "State agencies." Being able to monitor state agency updates in a smaller, concentrated feed was an effective strategy for catching session wrap-ups as they were released.

The state agencies list is just one of the Twitter lists we have built for our use here at the library. We also use Twitter lists to monitor various research organizations, as well as keep up with the legal world in Texas. One of our most heavily-used lists brings together the tweets of all current Texas legislators who are on Twitter.  A screenshot of the TXLegislators list on Twitter is below, and you can also view the list on our website at Texas Legislators on Twitter. 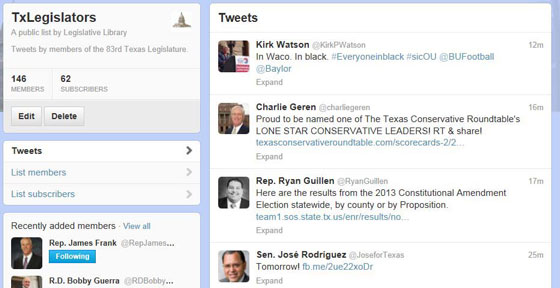 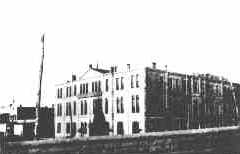 Texas was suffering from a severe drought. Transportation planning, taxes, and public school finance were topics of debate.  It sounds familiar – but this was the nineteenth century, not the twenty-first.


In 1883, the 18th Legislature passed, and voters approved, a constitutional amendment providing for an ad valorem tax for the support of public schools, but additional legislation was needed. 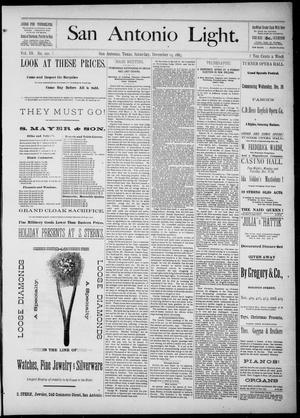 Meanwhile, the drought exacerbated conflicts between landless cowboys and ranchers who had fenced their land – and occasionally neighboring public land – with barbed wire. Desperate to find water and grazing for their herds, organized bands of cowboys with names like Blue Devils and Javelinas took to cutting fences, causing millions of dollars of damage.
The conflict between cattle ranchers and fence cutters was reaching the point of crisis; landowners demanded action, but there were no laws that would allow an adequate response.
In January of 1884, Governor Ireland called the Legislature into special session to address public school finance, fence cutting, and other issues. By the end of the special session, laws had been passed to make the willful cutting of fences a crime; to forbid landowners from fencing public lands; to alter the system of school finance; and to improve county roads.

Use NCSL Databases to Research Legislation from all 50 States

Interested in recent state legislation related to federal health care laws?  Do you ever need to see what state legislatures are doing about immigration, juvenile justice or other important topics?
Searchable bill databases created by the National Conference of State Legislatures can help.
Each database covers a different topic, and can be searched by state, topic, and keyword.   Search results include a summary of each bill, along with bill numbers and bill status and history information.  Most databases are updated every two weeks.

Getting The Most From Google

posted by Admin in Search tips

You can find almost anything in Google, but have you ever wondered if you're searching in the most efficient way? If so, take a look at some of the tips and shortcuts explained in the links below. Google can do amazing things in one click, like find population and unemployment rates, define any word or phrase, or even help you track the status of arriving or departing U.S. flights. It also has the capacity to handle precise word searching, allowing you to narrow your search results and save time.  For learning these tips and tricks, we liked the three websites below, however additional information can be found by visiting Google's Inside Search Features page.

Google Search Features: Learn about the different types of information you can find in one click, as well as more advanced search techniques like searching on the synonym of your search term, or using the plus (+) operator.

Basic Search Help: This page contains general recommendations for getting the best out of your Google search. Among other things, the folks at Google suggest keeping your search simple by using as few terms as possible and by using highly descriptive (unique) words.


More Search Help: Highlights the more advanced Google search features. Learn how to search for phrases instead of single words, search within a specific website, or exclude terms from your search.