Although architect Elijah E. Myers originally planned for a State Library on the second floor of the Capitol, it was not until 1907 that the State Library actually occupied the originally designated location. Because the 1881 fire that destroyed the earlier Capitol also destroyed all of the books in the State Library (only manuscript collections were salvaged), the need for a large library space was not urgent. 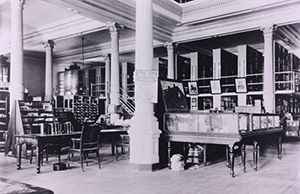 In the 1888 Capitol, the library first shared first floor quarters belonging to the Department of Agriculture, Insurance, Statistics, and History; the State Library was then included in that department.

The State Library began to provide "legislative reference and information" to the legislature in 1909, hence the creation of the Legislative Reference Library. Also during the same year, the Texas Library and Historical Commission act became effective. The courts also had a "law library" on the third floor of the Capitol, but it appears that the State Library room was assigned to the State Library, the Supreme Court Library, and the Legislative Reference Library until the Supreme Court building and other state office buildings were constructed in the late 1950s.

The off-white plaster walls and ornate plaster cornice details are typical finish treatments to be found in many locations throughout the restored Capitol. The restored wainscot and other architectural woodwork in the library are oak, and the shutters (historically referred to as blinds) have been reproduced in cherry to match the shutters that were first installed in the Capitol. Shutter hardware was also reproduced. 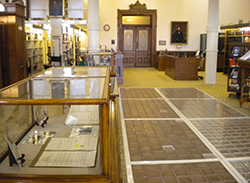 A central feature of the restored library is the glass tile floor sections and the open balustraded atrium of the third floor above. Many of the glass tiles and all of the framework for the glass flooring are original material that has been reinstalled. (The glass floor had been removed and the atrium enclosed in 1970 when a metal-roofed structure was installed as a museum exhibit space on the third floor.)

The "window sills" of the indirect radiators have been reproduced using polished, Etowah Fleuri marble from Georgia, and the decorative "cast-iron ornamental screens" were originally specified to be gold bronzed, "not less than fourteen carats fine". The reproduction radiators have been modified to provide electric convection heat.

The decorative or "embossed" glass in the transoms and door panels is double acid-etched glass, typical of the type of the decorative glass that is most readily visible along Capitol corridors.

Several new oak cabinet units have been installed throughout the library as an integral part of the functional HVAC system. The fire stair on the north glass wall is also a new addition.

The double-tiered, metal shelving units in the southeast corner of the library are original to this location and have been restored in place. In 1909, a New Jersey manufacturer (Snead and Company) supplied the lower level of shelving, and the same company later supplied the upper level of shelving in 1914-15. Multiple rows of new book stacks have also been custom detailed and installed to accommodate the contemporary need for additional book storage.

Although a dozen of these tables were originally planned for the library, only two of the round tables have been installed at selected column locations. The tabletops were reproduced in oak, but the scrolled metal brackets are original support braces that have been restored and reinstalled.

Linoleum was originally specified and installed as the library's first permanent floor covering. Historical evidence indicates that the linoleum possibly remained in place until c.1919 or later. The original linoleum pattern was recreated in a looped-pile carpet to provide a quieter library environment. Historical photographs were studied in detail to accurately reproduce the detailed pattern of the linoleum floor.

Permanent electric lighting was not in place when the Capitol was completed in 1888. Basic illumination was provided by temporary electrical lighting -- wire was strung in an exposed, casual manner.

The entire Capitol was originally piped for gas lighting, but only the exterior entrance lamp standards (and possibly some vault locations) were ever illuminated by gas. The original specifications for the main room of the State Library listed the following: "three eight-light chandeliers, and four wall-lights for each alcove; . . . .".

Based on photographic and other documentation for this room, the State Library furnishings reflect the use of restored original, and new reproduction, Capitol furniture where possible. Several manufacturers produced the furniture that was first purchased for the Capitol and additional Capitol furniture was later purchased from other suppliers, 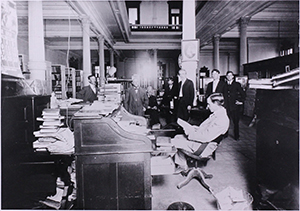 but the major supplier of wooden furniture in 1889 was A. H. Andrews & Company. They were the largest manufacturer of commercial furniture in Chicago during the 1880s and 1890s. Andrews manufactured and supplied some of the furnishings in 1889, but they also supplied furnishings that were produced by others.

Custom designed and compatible contemporary furnishings also have been produced and installed to fulfill functional library needs and the special requirements of the Legislative Reference Library. The circulation desk, card catalog desks and multiple carrel desks are examples of some of the specialized library furnishings that were custom designed to be room-specific. Compatible contemporary swivel chairs have been installed to meet functional needs. Period and reproduction furnishings are highlighted as follows:

The standing reference desk (adjacent to the glass floor) is an oak reproduction of a slant-top desk that was identified in several historical photographs. The original standing desk was used in the library's first floor location and then later moved to the second floor location, c.1907.

The oak roll-top or curtain desk (adjacent to the glass floor) is a representative antique desk that similarly matches one of the Capitol desks that is identifiable in historical library photographs, c.1910.

The trestle-style walnut table (opposite the roll-top desk) is one of the oldest furniture pieces in the room. The table was first identified in historical photographs of the temporary Capitol's interior, so it appears to be an item that was retained for installation in the 1888 Capitol. The table has been restored with a green billiard cloth top.

The oak reading tables along the north wall are reproductions of the most "typical" table style among 1889 Capitol furniture. The tables are made of quarter-sawn oak and have five baluster legs. Two five-foot, solid top versions of these tables also are installed in the room. Many versions of this typical Capitol table existed including four, five, and six-legged tables of different lengths and widths; some had solid tops and some had cloth tops. The use of green billiard cloth is authentic to original Capitol furnishings.

One smaller, original, Capitol table and one smaller, reproduction, Capitol table also have been installed in the library; both of these end tables are made of quarter-sawn oak and have baluster legs and solid tops. They are representative of one of the two, "typical" small table styles that were first produced by Andrews and historically used throughout the Capitol, originally supplied in quarter-sawn oak and in walnut.

The seven, glass-front, double-door, oak bookcases are original Capitol furniture pieces that have been restored. They were originally manufactured, and supplied, in large quantities (quarter-sawn oak and walnut) by A. H. Andrews & Company for many rooms throughout the Capitol; several smaller matching bookcases also were originally supplied for the Capitol. The double doors of the bookcases still retain original hardware and the drawer bases have original and/or reproduction hardware. 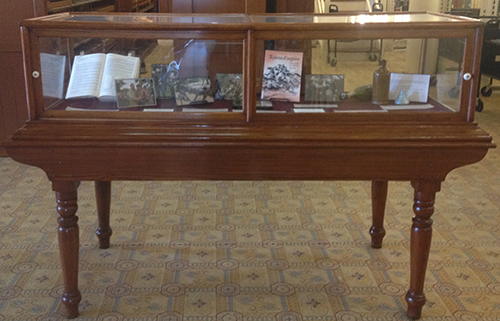 Multiple oak magazine stands are installed in the northeast corner of the library. Ten of the stands are reproduction items, and four of the stands are c.1904 items that have been restored. The historical magazine stands were manufactured by the Library Bureau (Boston) - - a company that specializes in library furnishings; the reproduction stands were manufactured by the same existing company. Similarly designed, custom newspaper stands also were produced (by another manufacturer) to hold the library's large collection of current newspapers.

The oak, slant-top, map stand (adjacent to one of the column tables) is another original Capitol furniture piece that was reproduced and is unique to the library. It was probably purchased at about the same time as the four magazine stands.

Two styles of chairs, an armchair and a side chair, were reproduced for the library. The reproduction armchair style has moulded wood details, a five-hole crest rail, front baluster legs, and a recessed cross stretcher. The chairs are quarter-sawn oak except for the plyed, or laminated, seats and backs which have perforated star designs in a figured, plain-sawn oak; the seat and back inserts are edge-detailed with brass, daisy-head nails. The reproduction side chairs have plain crest rails and perforated star designs in the seat and back inserts.

The walnut swivel chair with the cane seat (located at the roll-top desk) is also one of the oldest pieces of furniture in the library (c.1875-1880s). It is a historical Capitol chair that may have first been used in the temporary (1883) Capitol. Records show that the chair has continuously been associated with the State Library.

The artwork for the library primarily includes historical portraits, marble busts, a miniature sculpture and other selected paintings and items.

Text courtesy of the Texas State Preservation Board.