posted by TexasLRL in Criminal Justice

November 1, 2015, is the first day that federal drug trafficking offenders who requested and were granted reduced sentences under the 2014 drug guidelines amendment may be released. The following resources are provided to help you learn more about this topic.
FAQs regarding 2014 drug guidelines amendment
Materials on 2014 drug guidelines amendment
From the website: "In April 2014, the United States Sentencing Commission voted unanimously to reduce sentencing guidelines for most federal drug trafficking offenders. In July 2014, the Commission voted, again unanimously, to make this sentencing reduction retroactive (effective on November 1, 2014). Courts can consider motions for retroactive sentence reductions beginning on November 1, 2014, but no prisoners may be released based on this reduction prior to November 1, 2015."
Newspaper articles:
The U.S. is set to release thousands of prisoners early. Here's where they're headed.  Washington Post, Oct. 7, 2015
Texas to get largest number of early-release convicts  Houston Chronicle, Oct. 9, 2015 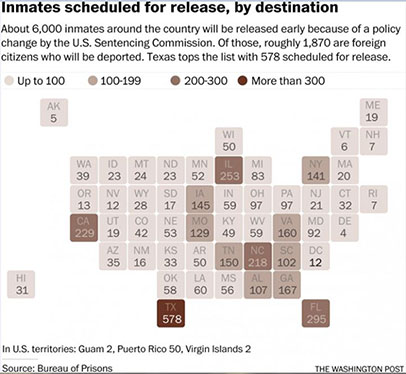