A committee substitute must be "germane"—it must address the same subject as the original bill.
How can you tell that a bill has been "substituted"? On Texas Legislature Online or the Legislative Archive System, the bill's actions will include entries like "Committee substitute considered in committee" and "Reported favorably as substituted." The committee report will note if it is a substitute, and will add a "CS" to the bill number. (So, HB 20 becomes CSHB 20.) In the Journal, it will be noted with the CS until it passes to engrossment.

In this occasional post, we explain terms used in the Texas legislative environment.
Legislators propose amendments to the Texas Constitution by filing joint resolutions (JRs). These JRs must be passed in both the house and senate by a two-thirds vote, and then approved by the voters of the state.
A legislator also may file a complementary bill to the JR describing how the JR would be implemented if approved. This complementary bill is called the enabling legislation. It may be passed during the same session as the JR or in a subsequent session. If voters reject a constitutional amendment (JR), the enabling legislation has no effect.
For example, the 84th Legislature passed seven constitutional amendments that were on the November 2015 ballot. In the House Research Organization's Amendments Proposed publication, their explanation of each ballot proposition includes whether the proposition has an enabling bill (in this case, propositions 1, 2, and 4) and what the enabling bill does. All seven constitutional amendments passed in 2015, so the joint resolutions' respective bills also went into effect as scheduled.
Investigate our Constitutional Amendments database to learn more about the process of amending Texas' constitution. Here you can search for amendments, find reports analyzing proposed amendments, see past amendment election dates and outcomes, and find additional sources. 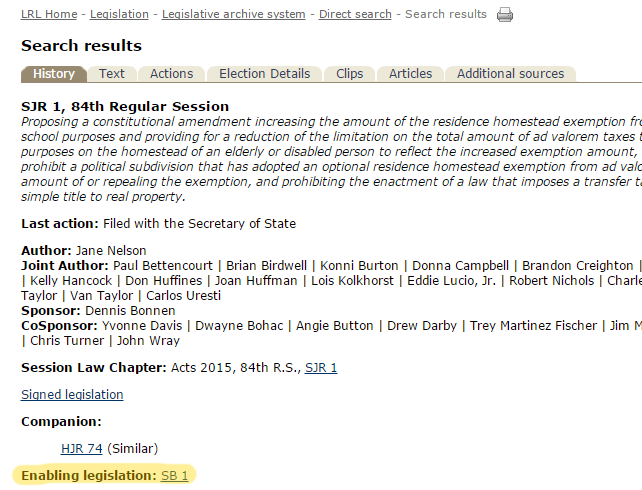