A few months ago, we shared some notable names in the minutes—famous figures like Willie Nelson and Larry Hagman who have testified at legislative hearings. But sometimes the notable figures come from the executive branch of the Texas government:

Notable Names in the Minutes 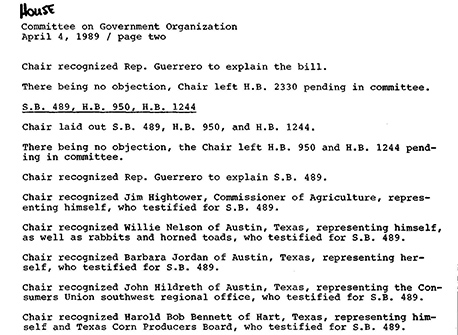 Most of the people who testify at legislative hearings are "regular" people—active citizens or members of organizations who want to make their voices heard about proposed legislation. However, in our committee minutes scanning project, famous names sometimes jump out at us. Here are a few examples:

Committee minutes from the 78th Legislature have been scanned and are available in the LRL's committee minutes database.
House and Senate committee minutes are a valuable resource for understanding the work that goes into crafting legislation. Scanned minutes may also include other committee documentation, including agendas, exhibits, hearing notices, press releases, rules, testimony, transcripts, and vote sheets.
Of particular interest as the Legislature prepares for the next round of redistricting is the 78th's Redistricting committee records (with Texas Legislative Council plans, maps, and court documents). More court documents that are not in the minutes can be found here: https://lrl.texas.gov/legis/redistricting/redistrictDocs.cfm.
Below are some other interesting items that can now be found in our database:
House
Corrections (H)  (with testimony 2/18/2003)
Licensing and Administrative Procedures (H)  (with a statement of intent for HB 2689 by Keffer, 4/3/2003)
Senate
Criminal Justice (S)  (transcript 1/4/2005, testimony 3/10/2004)
Finance (S)  (Comptroller Strayhorn's report to Senate Finance Subcommittee on State Contracting Practices, September 16, 2004)
Joint
Long-Term Care, Legislative Oversight (J)  (testimony/exhibits both dates)
Nutrition and Health in Public Schools (J)  (testimony/exhibits both dates)
Public School Finance, Select (J)  (testimony/exhibits 9/10/2003, 3/4/2004)
The LRL database also allows users access to committee documents from House, Senate, and Joint committees, 63rd–77th Legislatures (1973–2001), as well as to search for minutes from the 78th–85th Legislatures that are available through Texas Legislature Online.

On November 5, 2019, voters will have a chance to consider ten constitutional amendments proposed by the 86th Legislature. The proposed amendments cover a wide range of topics, including taxation, funding for various state agencies, a flood infrastructure fund, and more.
For background and analysis of the ballot propositions, see the House Research Organization's Constitutional Amendments Proposed for November 2019 Ballot, and the Texas Legislative Council's Analyses of Proposed Constitutional Amendments.
The Texas Constitution is one of the longest in the nation, at an estimated 86,936 words (The Book of the States, vol. 49). The Constitution is changed through amendments, which are proposed by the Texas Legislature and accepted or rejected by the voters. Since the current Texas Constitution was adopted in 1876, 498 amendments have been passed.
Amendments Proposed for the November 5, 2019 ballot by the 86th Legislature

Self-evaluation reports for the 2020-2021 review cycle are now available on the Sunset Advisory Commission's website.
To better understand how the Sunset process works in Texas, see this diagram. The Sunset Commission’s last report of the 2018-2019 cycle, Final Results of Sunset Reviews, was published in June 2019. A comprehensive listing of all of the entities reviewed by the Sunset Commission is available here. 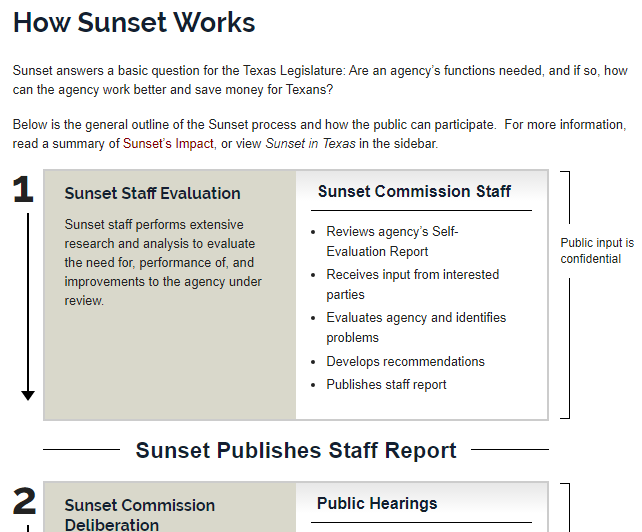 Legislative Intent in the Minutes

Many LRL researchers are interested in legislative intent—understanding why a bill becomes law, and who proposes ideas or reforms. However, "intent" is not always explicitly spelled out.
In more recent years, legislative intent often can be found in bill analyses within the bill files. It sometimes is recorded in the text of the bill or in the house or senate journals.
As we work on digitizing past committee minutes, we have also found some instances where legislative intent was added to the record in committee hearings.
Both of these intent documents are noted as reports in the committee minutes database records for their respective committees and sessions. You also can access them via the bills' records in the Legislative Archive System.
Conducting legislative research involves consulting a wide range of documents and close attention to detail. But checking everything is worth it—you never know which resource will provide the information you need!

The following legislative committee minutes in the LRL collection are scanned and available on our Committee minutes and related documents page:
House: 42nd – 77th
Senate: 27th – 77th
Interim: 38th – 77th
We most recently added interim minutes from the 62nd Legislature (1971-1972). As always, some committees are unique (see the interim committees on vegetable marketing and imported fire ant infestation), and others address major issues like school finance and coastal resources that the Legislature continues to work on today.
Minutes and other committee records from the 77th Legislature (2001) onward are available via Texas Legislature Online.

Now that session is over, do you need to find statistics on bills passed, dates that bills take effect, constitutional amendments up for election, and more? Use the links below to find information for the 86th Legislature:

The Library has created its bill effective dates page for the 86th Legislature. Legislators passed 474 bills that are now in effect. (473 bills and provisions within 15 bills took effect immediately; one bill took effect on June 4.)
The remainder of the 1,373 total bills signed by the governor or filed without the governor's signature will take effect over the next five years, between August 26, 2019, and January 1, 2024. Peruse our page to find detailed information about what takes effect when.
To keep up with new laws throughout the year, check the Library's list of bill effective dates.