The following bill statistics were calculated on July 20 at 8:40 a.m. The numbers will continue to change as the special session progresses.

The following bill statistics were calculated on July 13 at 10:45 a.m. The numbers will continue to change as the special session progresses.

posted by TexasLRL in Legislation

Recognition months, weeks, and days call attention to special events, health issues, industries, people, and more. Some are codified in Texas Government Code, Chapter 662, and highlighted on our website Texas Holidays and Recognition Days, with options to sort by holiday name, type, month, bill, and session.

Note: Buddy Check Day, 11th Day of Each Month:
"The 11th day of each month is Buddy Check Day to encourage veterans to contact other veterans, including those with whom they served, who may need assistance." (SB 460, effective September 1, 2021)

To see recognized months, weeks, and days from the 86th Legislature, please view our blog post from December 30, 2019.

Interested in how the final bill statistics from the 87th Legislature's regular session compares to statistics from past sessions? See the charts below to compare and contrast.

To find past bill statistics and other session information, see our previous blog posts on the legislative process. 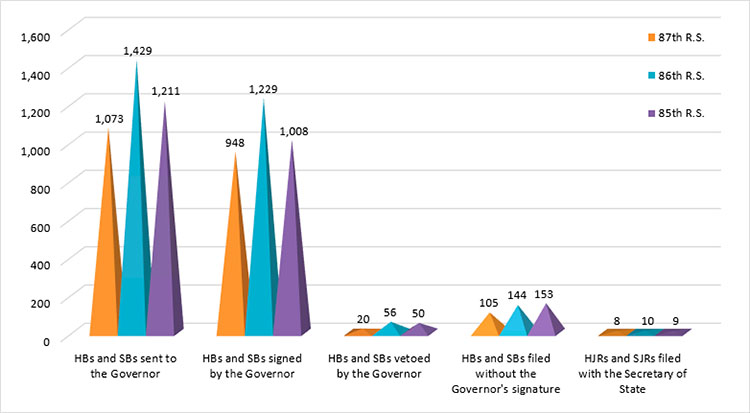 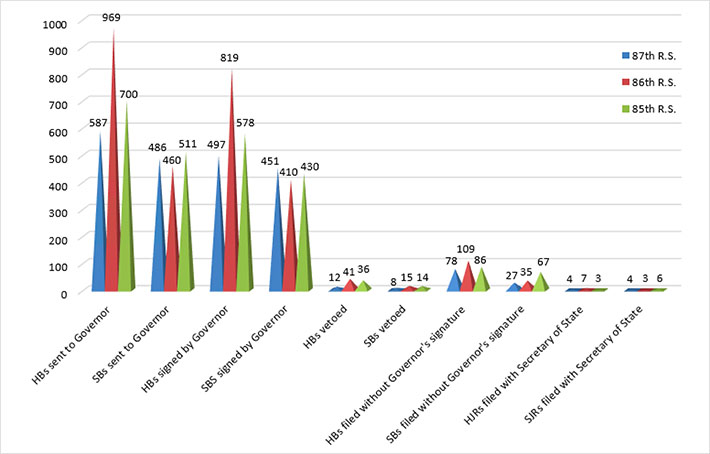 Sunday, June 20 was the last day the governor could sign or veto an enrolled bill from the 87th Regular Session. If neither action was taken, the bill became law without his signature.

To see how these statistics have changed since Sine Die, please view our blog posts from June 2, June 8, and June 15.

The following bill statistics were calculated on June 21 at 8 a.m.

You can also view lists of bills by the governor's action on Texas Legislature Online (TLO).

1. On TLO's homepage, click on the "Reports" link under Additional Searches.

2. Then click on the "General Reports" tab to see the lists of bills by the governor's action.

June 20 is the last day the governor can sign or veto an enrolled bill. If neither action is taken, the bill becomes law without his signature.

To see how these bill statistics have changed and other post-session information, see our previous blog posts on the legislative process. 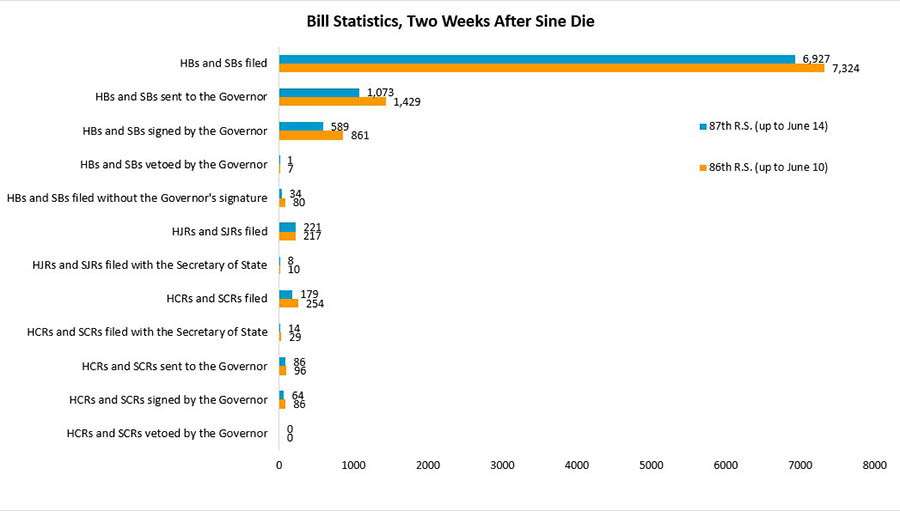 The following bill statistics were calculated on June 15 at 9:10 a.m.

June 20 is the last day the governor can sign or veto an enrolled bill. If neither action is taken, the bill becomes law without his signature.

To see how these bill statistics have changed and other post-session information, see our previous blog posts on the legislative process.

The following bill statistics were calculated on June 8 at 12:20 p.m.

*Statistics as of June 2, 2021, at 1 p.m. See our bill statistics page to compare these numbers with historical statistics.

The 87th Regular Session ended May 31, 2021. Bills that pass both the House and the Senate are sent to the governor to sign, veto, or allow to become law without his signature.

When the Legislature passes a bill, does it become a law right away?

No. Under Article 4, Section 14 of the Texas Constitution, bills passed by the Legislature must be submitted to the governor for approval. The governor can sign a bill, veto it, line-item veto an appropriation, or allow a bill to become law without his signature.

How much time does the governor have to act on a bill?

The deadline for the governor to act on a bill is contingent upon the point in time in which the bill is presented to the governor.


If the Legislature has adjourned sine die, or if the bill is presented to the governor less than 10 days (excluding Sundays) prior to final adjournment, the governor has 20 days (including Sundays) after the final day of the session to sign or veto the bill. If neither action is taken, the bill becomes law without the governor's signature (Texas Const. art. IV, § 14).

If the governor approves a bill, when will it take effect?


According to Article III, Section 39 of the Texas Constitution, a bill cannot become effective until at least 90 days after the session ends unless the bill passes both chambers with a favorable vote by two-thirds of the members.


If a bill received the votes necessary to become effective immediately, it will take effect on the date of the last action necessary for it to become law. This could be when the governor signs it, when the governor files it with the Secretary of State without approving or vetoing it, or when the time for the governor to act expires, if the bill has not been approved or vetoed during that time.

What happens to bills that do not pass?

Bills that do not make it completely through the legislative process die with the end of the session and are not automatically refiled during the next session.

What about other types of legislation?

Joint resolutions that pass both chambers of the Legislature are filed with the Secretary of State, and will be on the ballot as a proposed constitutional amendment for the November 2, 2021 election.


Simple resolutions are passed by only one chamber of the Legislature, and do not require the governor's approval.

Where can I find more information about special sessions?

The 87th Regular Session ends Monday, May 31. As the end of session nears, many House and Senate members are appointed to conference committees to resolve differences between the versions of a bill passed by their respective chambers. The publication The Legislative Process in Texas provides more information about conference committees.

You can also find these reports, as well as a list of the members appointed to a bill's conference committee, in the Texas Legislature Online record for each bill.

For example, when looking at the record with the "History" tab for HB 1, 86th R.S., the House and Senate conferees are listed above the Actions table.

The conference committee report for HB 1 is located on the record with the "Text" tab.