The Economic Stabilization Fund, a.k.a. The Rainy Day Fund 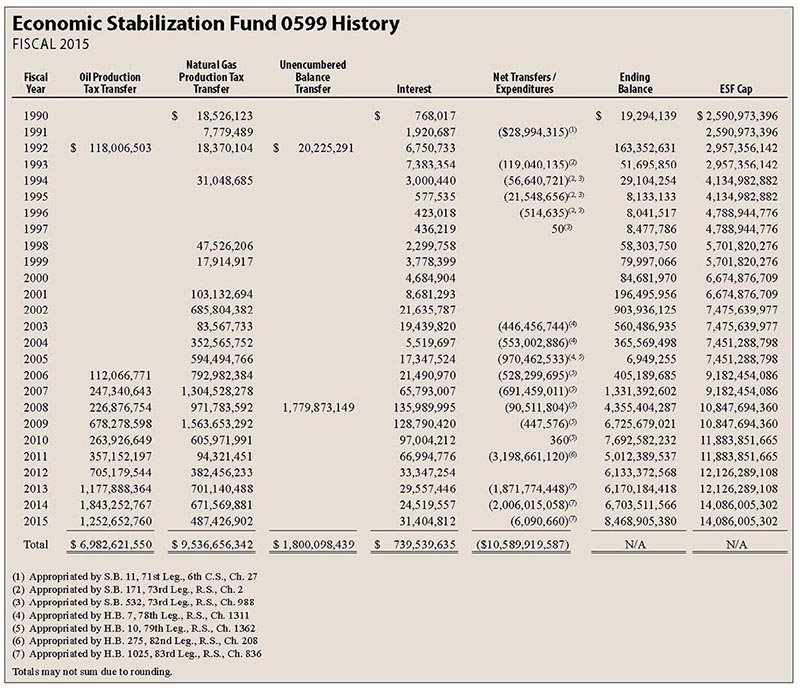 The Rainy Day Fund has been a topic of much discussion recently. In this post, you'll find answers to frequently asked questions.

When was the Economic Stabilization Fund created?

The constitutional amendment establishing the fund, HJR 2, 70th R.S. 1987, was approved by Texas voters on November 8, 1988. The following two analyses were prepared by the legislature to explain the amendment:

How much money does the fund have?

The amount in the Economic Stabilization Fund is capped at 10 percent of the total deposits made in the previous biennium to General Revenue (GR) excluding investment income, interest income, and amounts borrowed from special funds. (Texas Constitution Art. 3, Sec. 49-g)

Has the Legislature ever spent money from the fund?

During the 79th Legislature in 2005, HB 10, 79th R.S. appropriated money from the fund for a number of purposes. The following summary is from page 15 of the House Research Organization's report Writing the State Budget:

"The supplemental appropriations bill enacted by the 79th Legislature in 2005, HB 10 by Pitts, appropriated approximately $1.1 billion from the Rainy Day Fund for fiscal 2005 and a further $872 million for fiscal 2006-07. This $1.9 billion, along with other funds, was used to finance appropriations in HB 10 for a number of budget areas, including Child Protective Services, Medicaid, CHIP, and public education."

Which bills have appropriated money from the Economic Stabilization Fund?

As of 2011, the following bills have appropriated money from the Economic Stabilization Fund:

A three-fifths vote in both chambers is required to appropriate money from the fund (Texas Constitution Art. 3, Sec. 49-g).

What was the economic situation in Texas when the Economic Stabilization Fund was created?

In the mid-1980s, Texas experienced a severe economic crisis. In 1984, against a backdrop of declining tax revenues, the 68th 2nd C.S. passed a major package of tax increases. Two reports by the House Research Organization provide information on these increases:

The following session, the revenue continued to be lower than expected, causing problems for the State. The passage below comes from House Research Organization's Special Legislative Report: the August 1986 Special Session: a Preview

"In November 1985, the price of oil stood at $28 per barrel. By the beginning of this year, increased production by oil-producing countries, especially Saudi Arabia, started a steep price decline that turned into a freefall. In January, prices fell $5 in one week. By March, the price was $12 per barrel.… The state has reached the point that by December 1986 … it may not have sufficient cash available to cover its warrants."

The Governor called the 69th 2nd C. S. and 69th 3rd C. S. to deal with the shortfall. By the end of the 69th 3rd C.S., the Legislature had enacted both spending cuts and tax increases. A report by the House Research Organization provides detailed descriptions of both the cuts and the tax increases. Budget problems continued, and though the Legislature did not pass a General Appropriations Act during the 70th R.S. (one was eventually passed by the 70th 2nd C.S.), they did pass the Rainy Day Fund amendment to help the state weather troubled economic conditions in the future.