The Bush School of Government & Public Service at Texas A&M has just released an extensive new report on groundwater regulation in Texas. The report examines the regulatory structure of Groundwater Conservation Districts (GCD) in Texas, as well as the Rule of Capture, which governs landowners' rights to groundwater. The authors' findings lead them to conclude that there is a relative abundance of groundwater in all but two of the state's major aquifers, and that Texas has a regulation-induced shortage of groundwater.
Copies of the report are available in the library. Please call us at (512) 463-1252.
In related news, the 2017 State Water Plan was adopted in May. You can access it here. 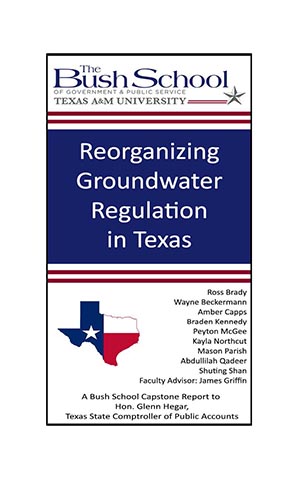 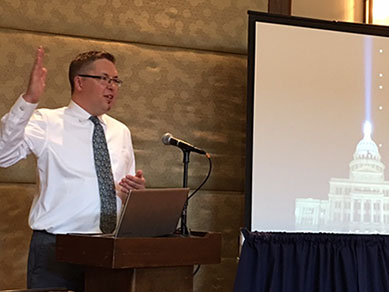 The Legislative Research Librarians Staff Section of the National Conference of State Legislatures recently welcomed Dr. Robert Mace of the Texas Water Development Board for a presentation at a professional development seminar in Austin. Dr. Mace told a fascinating and timely story of Texas water, including data, planning, and financing, to ensure water supplies for the future. He also explored the incredible diversity of climates, precipitation levels, major and minor aquifers, and river basins in Texas.
James Michener said that “Water, not oil, is the lifeblood of Texas.” Dr. Mace illustrated this by building a Texas "water budget" piece by piece, from the atmosphere to surface water to groundwater.
Interesting facts about Texas water:
Texas water law is a combination of our Spanish, Mexican, and Texan legal history. Legal doctrines of overland flow as private property, prior appropriation, and the rule of capture govern water ownership and supplies in the state. 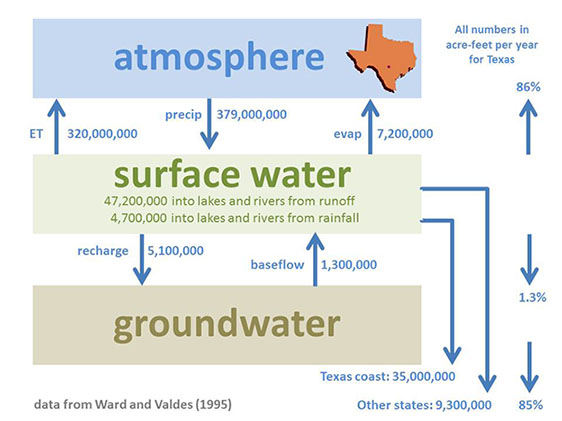 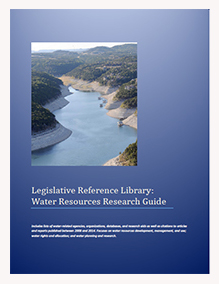 Looking for a starting point to research Texas water issues?  Check out the Legislative Reference Library's new Water Resources Research Guide.
This comprehensive bibliography of resources related to water includes lists of water-related agencies, organizations, databases, and research aids as well as citations to articles and reports published between 2008 and 2014.
The Guide focuses on water resources development, management, and use; water rights and allocation; and water planning and research.

posted by Admin in Water planning

Water issues are high priority as the 83rd Regular Session gets underway. Speaker of the House Joe Straus has called on the House of Representatives to address the state's water needs, and Lt. Governor David Dewhurst has voiced his support for using money from the Rainy Day Fund to spend on water projects. More recently, Governor Rick Perry discussed the State Water Plan in his State of the State speech.
The following list of resources provides information on the State Water Plan and can assist you in tracking legislative activity on this issue.
State Water Plan:
The current State Water Plan was developed between 2006 and 2011 and is available online.
State water plans going back to 1961 are available on the Texas Water Development Board's website.
For a history of water funding in Texas, please visit the Library's Texas Water Law Timeline.
Legislation:
As of January 30, the following bills have been filed to address funding of the State Water Plan:
Committees:
Water bills may be heard by the Senate Natural Resources Committee and/or the House Natural Resources Committee. A list of members of the House Natural Resources Committee can be found here and a list of members of the Senate Natural Resources Committee can be found here.
Interim reports:
The House Natural Resources Committee studied water issues during the interim and recently released a set of recommendations: Report to the 83rd Texas Legislature
The Senate Natural Resources Committee also examined water issues during the interim; video of their  interim hearings can be viewed at: http://www.senate.state.tx.us/avarchive/
Earlier interim reports about the State Water Plan are available, as well as interim reports about water planning in general.
Additional sources of information:
Texas drought information Texas Commission on Environmental Quality
Drinking water, water quality, and other water-related topics Texas Commission on Environmental Quality
Texas Water Development Board Find resources on water planning, groundwater, water innovation, and more.
News and other state legislation
Energy and environment legislation tracking database National Conference of State Legislatures
State rainwater harvesting statutes, programs and legislation National Conference of State Legislatures
Your guide to water issues in Texas StateImpact Texas
Water supply news Texas Tribune