LRL Home - Points of Interest - Speaker of the House

posted by Admin in Speaker of the House

Representative Joe Straus is the current Speaker of the Texas House of Representatives. First elected in 2005, he has served as Speaker of the House since the 81st Legislature in 2009. Representative Tom Craddick served as Speaker before Rep. Straus, and at 44 years of service, is the longest-serving member in the Texas Legislature. He is surpassed only by A.M. Aikin, Jr., who served from 1933 to 1979 (almost 46 years!) The library makes a complete list of Speakers of the Texas House available at: http://www.lrl.state.tx.us/legeLeaders/members/speakerbio.cfm 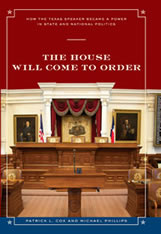 This is also a good opportunity to highlight a book from our collection: The House Will Come to Order, How the Texas House Speaker Became a Power in State and National Politics (University of Texas Press, 2010). Drawing from an oral history project with former Texas House Speakers Tom Craddick, Ben Barnes, Gus Mutscher, Billy Clayton, Gibson D. "Gib" Lewis, Pete Laney and others, the book charts the evolution of the Speaker's role in the history of the Texas Legislature.

Speaker of the House Joe Straus has released his interim charges to House standing committees, and Lieutenant Governor David Dewhurst has released select interim charges relating to drought and wildfire preparedness to Senate standing committees. The complete text of these charges, as well as information about legislative committees, can be found in the Legislative Reference Library's legislative reports database. In the "Search committee charges" section, choose "82nd" as the legislature and click "search" to a see a complete list of charges that have been issued for the 82nd Legislature. This list will be updated as additional charges are released. If you'd prefer to see only charges relating to a specific topic or committee, try filling in the "subject" or "charge text" boxes to get a list tailored to your needs.

You can also use the legislative reports database to search for committees and full-text interim committee reports all the way back to the 1st Legislature, or you can view a complete list of committees by session. If you're not sure which committee you need, check out the committee search page. Finally, our new committee minutes database contains the full text of minutes from House and joint committees from the 63rd through 74th Legislatures (1973-1995). Senate minutes for those years are currently being scanned and will be added as completed.

posted by TexasLRL in Speaker of the House, Members of the Legislature

Friday, April 15, 2011 is Speaker's Reunion Day, a day for former members of the Texas House of Representatives to gather and be honored for their service to the State of Texas.
Speaker's Reunion Day is the modern descendant of Speaker's Day, a long-standing tradition of honoring the Speaker of the House for his service.
During the nineteenth century it was the custom at the end of the session for the employees and members of the House to present the Speaker with testimonials and mementos of his service.  Canes, silver tableware  and watches were common gifts.
During the twentieth century, elaborate ceremonies become common.  The term "Speaker's Day" is first used in the House Journal in the 48th Legislature in 1943.  In his 1943 remarks, Speaker Price Daniel observed that it was a complete surprise to find that a Speaker's Day had been arranged for him, recalling "I will admit that I doubted the word of my secretaries this morning when they kept saying it was a few minutes to ten…I felt like they were wrong, and so I walked out here on the floor of the House, just in time to see that the session was opening without me.  I walked to the platform in time to hear our Chaplin, Brother Coltrin, pray for the Speaker, and then I knew what was up."
By the middle of the twentieth century, former members and former Speakers regularly attended the Speaker's Day celebrations.   In 1951, former Speakers R.E. Morse, Homer Leonard, Price Daniel, Claud Gilmore, W.O. Reed and Durwood Manford were present to honor Reuben Senterfitt.   The following session, Speaker Senterfitt requested that Speakers Day not be held again on his behalf; instead, Speaker Senterfitt hosted an open house for the members.
Speaker's Day resumed with the following session, and the observance became an all-day affair featuring speeches, mementos, barbeques, balls, and other entertainments.  In 1971, members of the reform-minded group known as the Dirty Thirty challenged the traditional observance of Speaker's Day, arguing that the presentation of gifts had gotten out of hand and become a burden on legislators, house employees and lobbyists.
In the following years, Speaker's Day continued, but often on a smaller scale, with brief ceremonies and few or no gifts presented.  In 1981, Speaker Bill Clayton celebrated Speaker's Day with a members' reunion.  More than 750 former members were invited to attend, and festivities included a barbeque on the Capitol Grounds and a party at the Erwin Center.
In years since, the reunion has come to be the defining feature of the day, which was renamed Speaker's Reunion Day in 1993.

posted by TexasLRL in Speaker of the House, Members of the Legislature