We are delighted to welcome guest columnist Richard Eisenhour, Collections Coordinator at the Texas State Preservation Board, to tell us about one of the Library's most frequently requested items, Santa Anna's Chair. 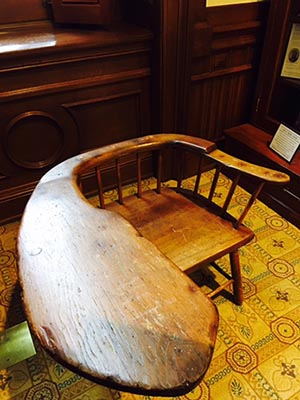 Although little is known conclusively about the austere desk-like chair that occupies a corner of the Texas Capitol's Legislative Reference Library, a great deal of lore has always surrounded it.   More than 100 years ago the chair was donated to the State Library and has long been known as “Santa Anna’s chair.”
Following his capture after the Battle of San Jacinto, the Commander of the Mexican army, General Antonio López de Santa Anna (1794 – 1876,) was reported to have used the chair while held as prisoner-of-war at the home of Dr. James Aeneas E. Phelps during the months of July to November 1836.  The Phelps home known as Orozimbo Plantation had been located twelve miles northwest of what is now West Columbia, Brazoria County, Texas.   State Librarian C. W. Raines accepted the chair as a donation from Dr. Phelps’ descendants in 1905.
The chair resembles a plain schoolhouse seat, with a large armrest.  It is said that Santa Anna used the chair for all of his writing during imprisonment.   The chair somewhat resembles a primitive version of a popular eighteenth-century seating form called a “Windsor chair.”  A Windsor is built with a solid wooden seat into which the chair-back and legs are round-tenoned, or pushed into drilled holes, in contrast to standard chairs, where the back legs and the uprights of the back are continuous.  Like the Santa Anna chair, the seats of Windsor chairs were often carved into a shallow dish or saddle shape for comfort. Traditionally, the legs and uprights were usually turned on a pole lathe.  The back and arms of the Santa Anna chair appear to have been carved, although similar features on Windsor chairs are sometimes formed from steam bent pieces of wood.
An article in an Austin newspaper dated November 26, 1905, reporting on the Phelps descendants’ donation cites, “this is the chair in which the Mexican general wrote while in captivity [in] 1836.”  The article further notes:
Santa Anna was treated so kindly while a prisoner at the Phelps home that he promised Dr. Phelps that if ever it came within his power he would return the favor.  The chance came when six years later a son of Dr. Phelps was captured by the Mexicans and as soon as Santa Anna heard that Phelps was a prisoner, he at once ordered his release and gave him his freedom.
According to the New Handbook of Texas, Dr. Phelps’ son Orlando was pardoned by Santa Anna for his participation as an insurrectionist in the ill-fated Mier expedition of 1842.  That Santa Anna regarded Dr. Phelps so highly is thought to have stemmed from the Doctor having saved the General from an attempted suicide.  An improbable tale is that Santa Anna was seated in the very same chair when Dr. Phelps pumped the poison from the General’s stomach.
Following his election as leader of the Republic of Texas, one of the first orders of business for President Sam Houston was to get the infamous prisoner out of Texas.  Santa Anna was released through diplomatic channels to Washington, D.C. and eventually back to Mexico, where he helped foster military and political upheaval for years to come.
The Phelps’ Orozimbo Plantation homestead at West Columbia, Texas—built in the 1820s—was ruined by a 1932 hurricane and virtually nothing of it remains today.
Whether any of the stories that have attached themselves to the Santa Anna chair are true pales compared to the artifact’s actual survival.  The chair remains an interesting symbol and a tangible connection to our State’s turbulent beginnings.