Leading up to Halloween each year, we gather spookie stories and tales of ghostly hauntings that add to the aura of the Texas Capitol and the Lone Star State. Below you'll read about mysterious lights, a quack medicine doctor, and a man whose corpse was buried standing up. 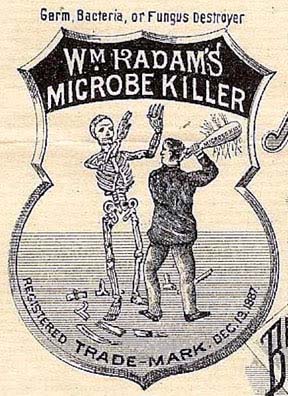 In the 19th century, death from tuberculosis, a.k.a. "consumption," was widespread and William Radam of Austin claimed to have a remedy. Perhaps Austin's original "weird" character, Radam, operated a seed store at 907 Congress Avenue, and developed, bottled, and sold "Radam's Microbe Killer." Although deemed a quack, sales of his "miracle cure" made him a wealthy man. The building at 907 Congress Avenue has been vacant for over 20 years; does his spirit linger, handing out samples of his microbe killer? 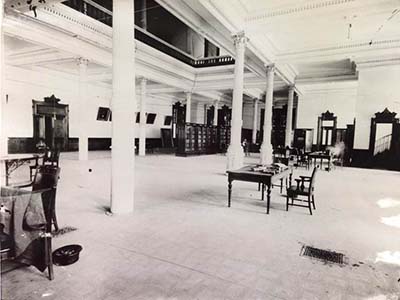 Ghosts in the Legislative Reference Library

This photo of the Capitol's Legislative Reference Library space shows the room as it appeared circa 1902-1907, when used for the Supreme Court Library.  A ghost-like figure can been seen sitting at a table, near the door to a hidden staircase.  It is reported that a "lady in red" frequents this staircase and the office above it, perhaps hoping to meet up with her lover who once worked in that office. 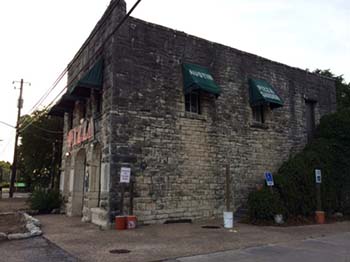 The Old Rock Store in Oak Hill has watched over travelers since 1898 when James Andrew Patton, Texas Ranger, and unofficial "mayor of Oak Hill" built the stone building to house his mercantile business.  His daughter, Rosa Patton White, worked in the store after the untimely death of her Texas Ranger husband, John Dudley White, Sr., in 1918 at the hands of army deserters.  Is Ranger White the mischievous ghost who inhabits the building (now home to Austin Pizza Garden) looking for his wife? 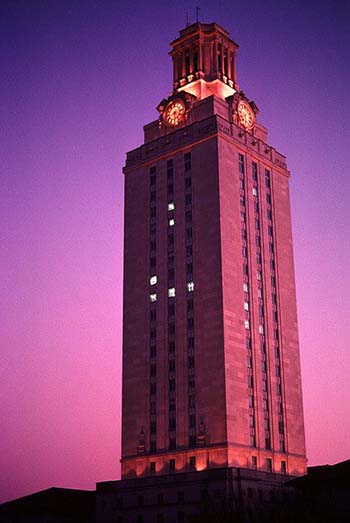 Foreboding in the UT Tower

Completed in the 1937, the University of Texas Tower has long been a landmark on the Austin skyline, but it is also notorious for other reasons -- the construction worker who fell to his death, a number of suicides, and the most infamous event of all, the 1966 tower shootings by Charles Whitman. Some visitors report general feelings of foreboding and claustrophobia, as well as encountering cold spots in the stairwell.  Many believe Whitman, himself, is the spirit who turns lights on and off. 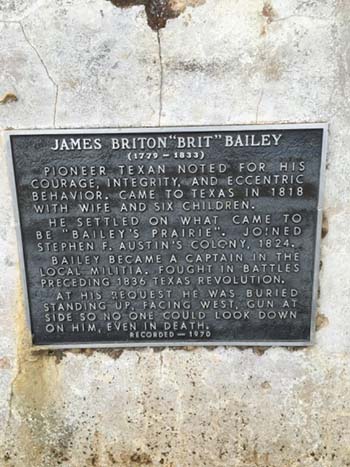 James Briton "Brit" Bailey was a larger than life character who settled in Stephen F. Austin's colony.  He let it be known that when he died, he wanted to be buried standing up, facing west, with his gun, powder horn, rifle balls, and a jug of whiskey.  Legend says all but one of those requests was carried out.  An unexplained light is seen from time to time near Bailey's Prairie on Highway 35 between Angleton and West Columbia.  Perhaps it's just old Brit and his lantern searching for that whiskey jug. 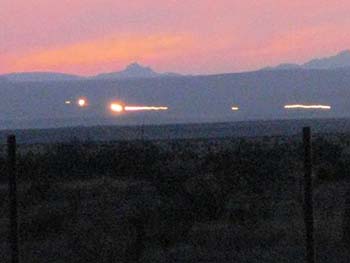 The Lights of Marfa

Strange lights have been reported between Alpine and Marfa, across Mitchell Flat with the Chinati Mountains as a backdrop since the 1880s.  They appear in various colors as they move about, disappear and reappear.  Some believe the logical explanation is car headlights from U.S. 67, while others point to a natural, scientific explanation.  A legend persists that Alsate, the last Apache chief who lived in the area, is lighting watchfires. The lights are definitely there but for what reason? 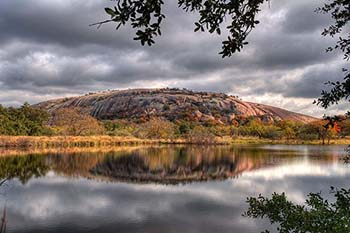 Various Indian tribes have held Enchanted Rock in both religious awe and supernatural fear.  Their legends speak to attempts to explain the natural phenomena they saw. Noises and lights were attributed to a great devil trapped in the rock or various other spirits who linger, such as the last of a tribe's warriors who fought to their end here.  Indentions on the rock's summit are the footsteps of a doomed chief forced to walk the rock forever as a punishment for the sacrifice of his daughter. 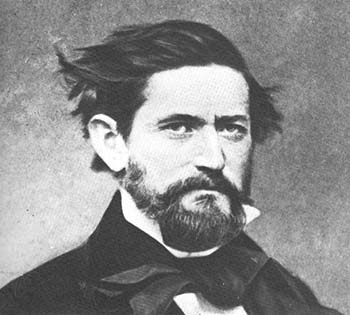 In an 1834 letter, W.B. Dewees said of Enchanted Rock, "The Indians have held it sacred for centuries, and go there once a year to worship it.  They will not permit any white person to approach it." In the fall of 1841, Captain John Coffee "Jack" Hays, singlehandedly held off a party of Comanches because the band would not pursue Hays when he climbed to the rock's summit.
Cover image by J.W. Remington Photographics