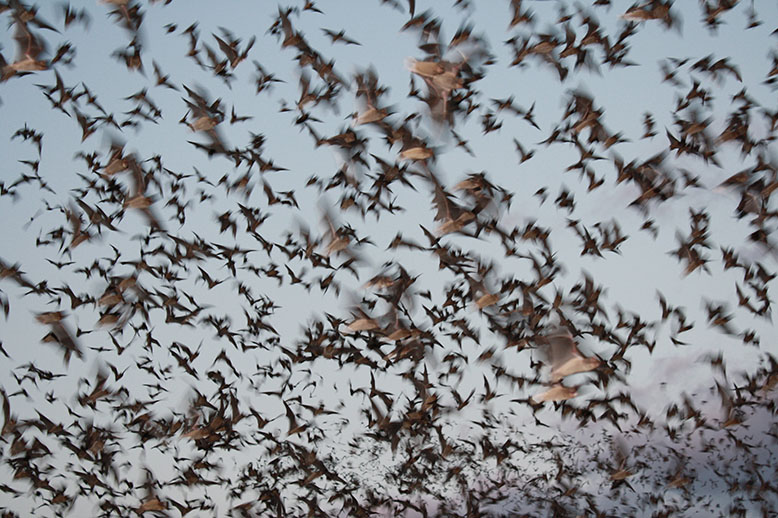 For the past few years around Halloween, we've shared ghostly stories relating to Texas—see last year's post and our "Capitol Spirits" Pinterest board. This year, we thought we'd do something a little different and write about one of Texas' official state symbols that is commonly associated with Halloween: bats.
After all, Texas' official flying mammal is the Mexican free-tailed bat, per SCR 95, 74R. Did you know that Texas is home to the world's largest known bat colony, in Bracken Cave Preserve in Comal County? Bracken Cave is host to more than 15 million Mexican free-tailed bats, making it one of the largest concentrations of mammals on Earth. Texas also boasts the world's largest urban bat colony, with about 1.5 million Mexican free-tailed bats residing under the Ann W. Richards Congress Avenue Bridge in Austin, right down the street from the Texas Capitol.
These bats live in Texas from around March through late October, then migrate to warmer southern climes in Mexico. Both the bridge and Bracken Cave are maternity colonies, meaning that millions of baby bats are born in these locations each summer, too. 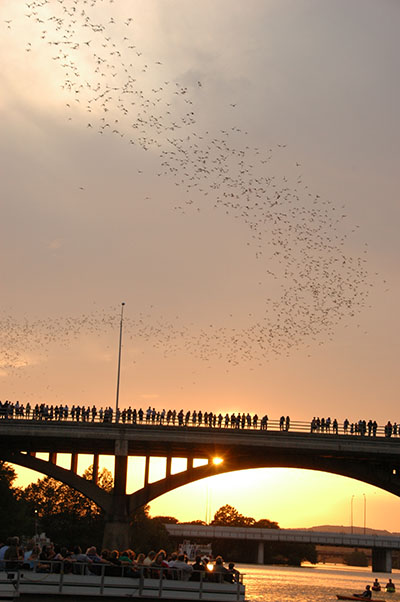 Some people are concerned about bats, with practical worries about rabies and guano and/or fears of the supernatural connotations of the creature. However, Bat Conservation International (headquartered in Austin) works to educate the public that bats are safe as long as people don't try to handle them, guano is good fertilizer, and bats offer excellent natural pest control services! A nursing mother bat consumes up to her body weight in insects each night. It's been estimated that all together, the Bracken Cave bats eat 250 tons of insects, and that the Austin bats eat five to ten tons of insects.
However, Bracken Cave and Austin are not the only places bats live in Texas, and our state is home to 32 of the 47 species of bats found in the United States. For information about where to go to view a bat emergence (when they come out to hunt insects at dusk), visit the Texas Parks & Wildlife Department's Bat-Watching Sites of Texas guide.
In addition to bats, there are a couple of other Texas state symbols associated with Halloween. The pumpkin was declared the official state squash in 2013 (HCR 87, 83R), with Texas being the fourth leading state in commercial pumpkin production. And while the official rodeo drill team (HCR 136, 80R) is distinctly of this plane, the Ghostriders' eerie name evokes the story of a cattle drive gone awry that inspired ghost stories and the famous song, "Ghost Riders in the Sky."
Sources:
"Bat-Watching Sites of Texas," Texas Parks & Wildlife Department, https://tpwd.texas.gov/huntwild/wild/species/bats/bat-watching-sites/, accessed 2017 September 29.
"Bracken Cave: Protecting a Jewel in Texas," Bat Conservation International, http://www.batcon.org/our-work/regions/usa-canada/protect-mega-populations/bracken-cave, accessed 2017 September 29.
"Protect Mega-Populations: Congress Avenue Bridge," Bat Conservation International,  http://www.batcon.org/our-work/regions/usa-canada/protect-mega-populations/cab-intro, accessed 2017 September 29.
Images:
Top right: Bats emerging from the Bracken Cave, photo by Flickr user U.S. Fish and Wildlife Service Headquarters.
Bottom left: People watch the bat emergence from the Ann W. Richards Congress Avenue Bridge and from boats on Lady Bird Lake in Austin, photo by Flickr user Woody Hibbard.