LRL Home - Points of Interest - Freshmen in the Texas Legislature

Freshmen in the Texas Legislature

Every few years, we update our comparison across Legislatures of the percent of freshmen at the beginning of each regular session. Here's our first post from 2012 on the topic (which explains some of the reasons for unusually high numbers), and here is the 2014 update.
Below you can see the graph with the addition of the 84th and 85th Legislatures. Please note that we defined freshmen as new legislators sworn in during the first day or week of the regular session. Members who first served during a called session of a legislature are counted as freshmen members of that legislature. Excluded are members who were elected to a legislature but never sworn in due to death, resignation, or other factors.
You can see these and other figures on our member statistics page. Exact percentage of freshmen each session can be found here. 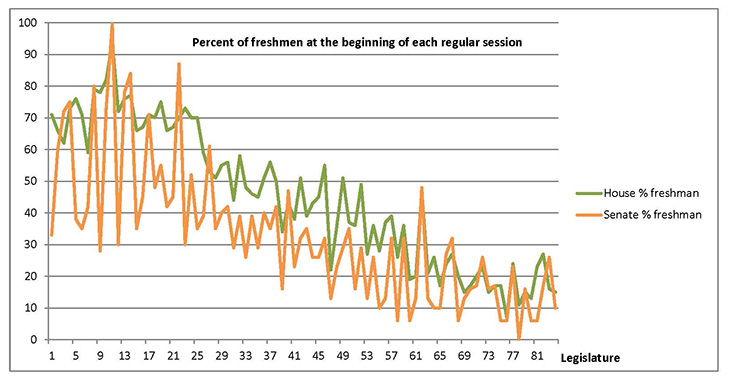