Every now and then, LRL patrons will ask a question like, "who is Vernon and why is his name on the Texas statutes?" To which we say, "good question!" People often conduct legislative history research with a tight deadline that doesn't leave much time for musing over the origins of the sources, but it can be instructive to learn about who has worked to compile Texas' laws over the years. In our occasional "Who Is…" series, we'll take a look at some of the important resources for studying Texas legislative history and the publishers, lawyers, and legal scholars behind them. Check out our previous entries on Vernon, Sayles, and Paschal; in this post we're focusing on H.P.N. Gammel. 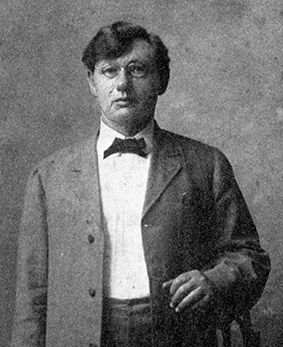 When the old Capitol building burned in 1881, the state lost not only a government building but also its stored copies of session laws and other government records, some dating to the Republic of Texas.  Fortunately, a quick-thinking bookseller saw an opportunity for preservation…and a business venture. H.P.N. Gammel’s The Laws of Texas (1822-1897) was the result of his conservation effort and became an essential item in Texas law libraries.[1]
Hans Peter Mareus Neilsen Gammel was born in 1854 in Grenå, Denmark, then immigrated to Chicago in the mid-1870s. At first, Hans was content to stay with his sisters and work to save money to bring his wife, Marie, and baby daughter, Marietta, to Chicago. However, his brother, Nels, had ventured west and had some success in the gold fields. Nels offered to loan the money for Marie and Marietta’s boat fare while Hans accompanied him back west. The brothers made—and lost—money in their ventures together. Rather than returning to Chicago, they decided to go to Texas, attracted by a few Scandinavian settlements near Austin.[2] 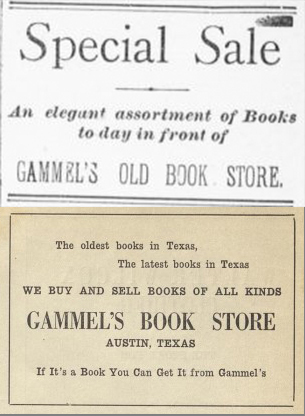 Gammel started out in Texas putting up poles and stringing wire for a telegraph company, but he needed a more permanent business when his wife and daughter joined him in Texas at the end of the 1870s. He rented space at Hickory (now 8th Street) and Congress Avenue in Austin, where they could have a storefront with an apartment in the back. He occasionally took contract jobs with telegraph companies, while Marie ran the shop.[3]
The store initially sold writing paper, jewelry, and other general items. One day, however, a man asked to borrow money, offering 24 used books as security. Seeing an opportunity, Hans bargained to buy the books outright for 25 cents. First he read them, helping him begin to understand the public’s reading preferences, and then he bundled them in six-book sets for 25 cents each. And thus, a bookseller’s career began.[4]
Gammel wrote in his diary that his was the “first and only bookstore of any type in this part of the state,” and that he became known as the "10¢ man": “I would buy anything for 5¢ and sell for 10¢. I am sure I sold books worth 5 to 10 dollars for 10 cts., but I am also sure they cost me less.”[5]
Tragedy struck the Gammel family in 1880, when both he and his wife got sick. They sent Marietta to stay with friends, Hans spent six weeks in the hospital, and Marie died. Once Hans regained his health, he sent Marietta to school during the day at the Convent of St. Mary so he could reopen his book stalls. In 1881, he married Josephine Ledel, a Swedish immigrant, at a Pflugerville church.[6]
The couple had been married for just a few months when the Capitol caught fire. At his shop down the street, Gammel witnessed efforts to throw papers and books out the windows to save them, but the combination of fire, rain, and wind had wreaked havoc on the papers, and the building’s superintendent wanted them hauled away. Gammel recalled:
“…I got permission from the authorities to do this job. It meant extra money! That night I lay awake thinking of what I would do with all the rubble. I did not have much knowledge—especially about law books—but the beginning of my love of books had become rooted, and the fact of knowing that all the knowledge and records in those papers would be lost preyed on my mind. I wondered if any of them could be salvaged.
The next morning I put on my hip boots, armed myself with a pick and a shovel, and waded and worked in the slush for days hauling all the rubble—wagonloads of it—to my little house on 8th Street. Mrs. Gammel was not happy about it but she helped me to dry out anything that was not burned to a crisp. We used up all the clothes lines in the yard and strung rope between the trees and on the porches. Then I sorted the papers out the best I could and stacked them in bundles—for why I did not know. I just knew they should not be destroyed.”[7] 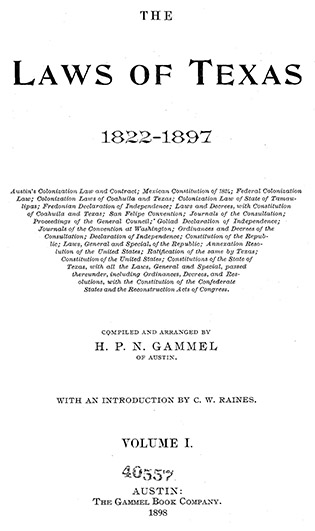 Nearly a decade later in 1892, Gammel bought a print shop and established the Gammel Book Company. The press’ first big job was John C. Duval’s Early Times in Texas, and he later printed C.W. Raines’ Bibliography of Texas and Noah Smithwick’s Evolution of a State. Gammel’s primary ambition, however, was to obtain a contract from the House and Senate to print legal documents. His daughter, Dorothy Gammel Bohlender, recalled “It was not by accident that his ‘place of business’ always was near the capitol building. His ‘locality in Austin,’ as he said, gave him a chance to be in touch with events affecting all of Texas, and he wanted to be as close as possible to the men participating in those events.”[8]
Around the same time that Gammel began his printing work, Gov. James S. Hogg appointed C.W. Raines librarian of the Texas State Library. Gammel and Raines developed a mutually beneficial friendship: as a bookseller, Gammel was uniquely equipped to help Raines locate materials for the State Library, and as a printer, he could publish Raines’ scholarly works. On Raines’ part, his legal background and research experience made him a valuable partner to Gammel in putting in order the bundles of papers saved from the Capitol.[9]
In 1898, Gammel published the first of what would be a ten-volume set, The Laws of Texas, 1822-1897. He planned to release one volume every 60 days till completed and set up a system for subscribers to pay as they received volumes.[10] Raines wrote an introduction for it, in which he noted that “these volumes are in the nature of original evidence for the student of our jurisprudence, and that nowhere else can it be so well studied as to its origin, character, successive changes, and its present status as a blended system of the Roman Civil Law and the Common Law of England.”[11] 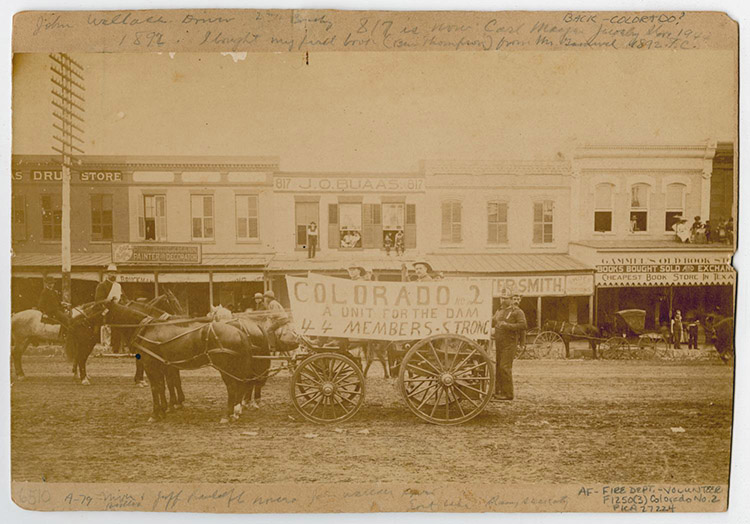