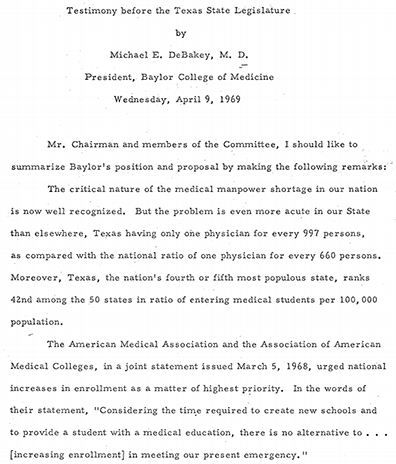 House and Senate committee minutes are a valuable resource for understanding the work that goes into crafting legislation. House standing committee minutes in the Legislative Reference Library collection from before 1973 have been scanned and are available in the LRL's committee minutes database.
Scanned minutes, particularly from earlier sessions, may also include other committee documentation, including agendas, exhibits, hearing notices, press releases, rules, testimony, transcripts, and vote sheets. For example:
The LRL database also allows users access to committee documents from House, Senate, and Joint committees, 63rd–77th Legislatures (1973–2001), as well as to search for minutes from the 78th–85th Legislatures that are available through Texas Legislature Online.
The digitization of the Senate standing committee minutes prior to 1973 is in process.
Image: On April 9, 1969, several leaders from the Baylor College of Medicine, including Dr. Michael E. DeBakey, testified before the House and Senate's respective State Affairs committees, offering possible solutions for the state's physician shortage.