Art in the Legislative Reference Library

The Legislative Reference Library features a number of historically significant paintings and sculptures.  Some depict famous Texans, while others highlight less-well known people and incidents from Texas history.   Below, we describe works illustrating Texas history during the period of Mexican rule and the Republic of Texas. 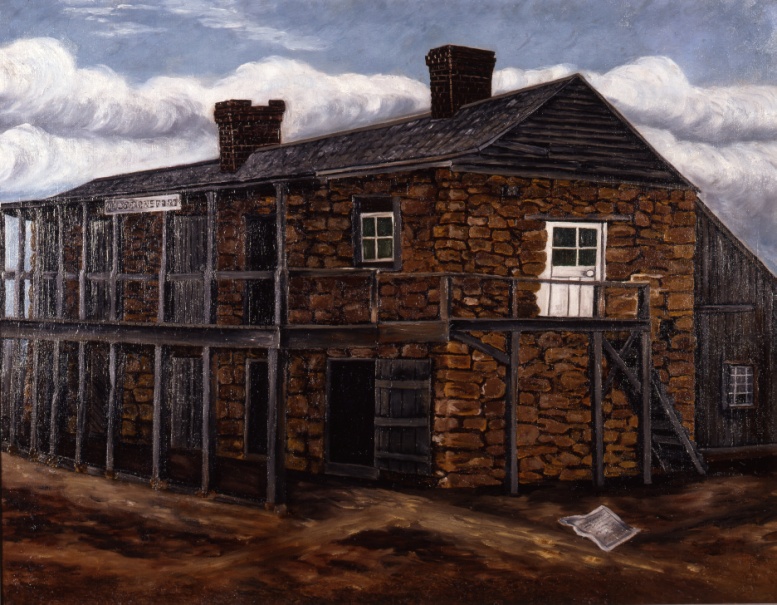 Fort at Nacogdoches (CHA #1989.169) depicts the site of one of the first clashes between colonists and Mexican authorities once Texas was open to settlers in the early 1820s. The government gave a vast land tract near Nacogdoches to an empresario named Haden Edwards. Edwards brought approximately 800 families to this tract in October of 1825 and discovered many people already living within the boundaries of his grant. Although Edwards was required to recognize the rights of those settlers who held legal titles in the area, many of the early settlers did not have titles to their land. Edwards told the settlers to vacate the premises if title was not held, which angered those individuals whose ancestors had lived on the land for decades. These settlers, many whom were Cherokee Indians and Mexicans, wrote letters of protest to the. Mexican government. Political Chief Jose Antonio Saucedo sympathized with the settlers' plight and told Edwards that he could not charge them for new land titles. Edward's brother Benjamin thought this decision unfair and decided to declare the colony independent from Mexico. On December 16, 1826, Benjamin Edwards led a small group of settlers in the taking of the old stone Fort at Nacogdoches. They raised a red and white flag bearing the words "Independence, Liberty and Justice" and proclaimed the creation of the Republic of Fredonia. They received no assistance from Austin's colony or the United States. In late December, the Fredonia Revolt collapsed. A few of the Fredonians were captured, but many escaped across the Sabine River into the U. S. Those who were captured were later released. This incident planted the seeds of concern in the minds of Mexican officials that America was scheming to acquire Texas. This painting is visible in historical photographs of the library as early as ca. 1908–1909. 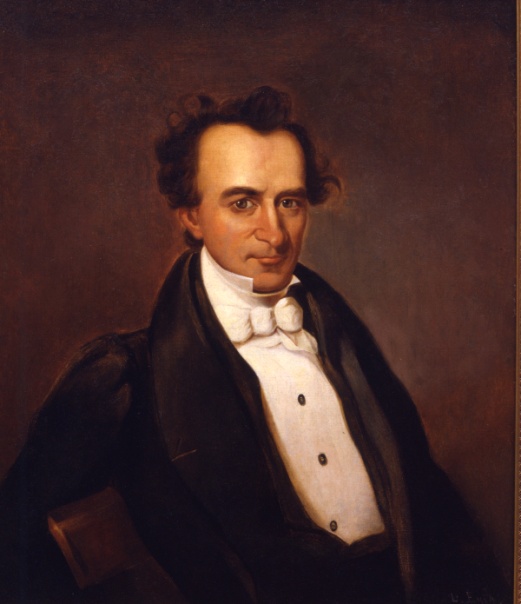 Stephen Fuller Austin (CHA #1989.101), the founder of Anglo-American Texas, was born November 3, 1793, in Virginia. After schooling in Connecticut and Kentucky, he returned to his family in Missouri and prepared to work with his father, Moses, to settle 300 Anglo-American families in Texas. After the death of Moses Austin in 1821, however, the younger Austin was left to lead the colonists. During the next 15 years, Austin settled over 1,000 families, surveyed the various terrain and created many early maps of the area, and remained devoted to the development of the land now known as Texas. He wrote in July of 1836 that "The prosperity of Texas has been the object of my labors, the idol of my existence—it has assumed the character of a religion, for the guidance of my thoughts and actions, for fifteen years." He died five months later at the age of 43.  Artist Louis Eyth (1838–1889) of Galveston was commissioned in 1873 by Joint Resolution Number 86 to copy the Austin portrait in the Senate Chamber.  It was probably painted in 1836 in New Orleans where Austin had traveled as minister to the United States from the Republic of Texas; family records show that Austin had that portrait made for his sister, Emily Bryan Perry, whose grandson, Guy M. Bryan, Jr., later presented it to the State of Texas in 1919.   Louis Eyth. ca. 1873, Oil on canvas. 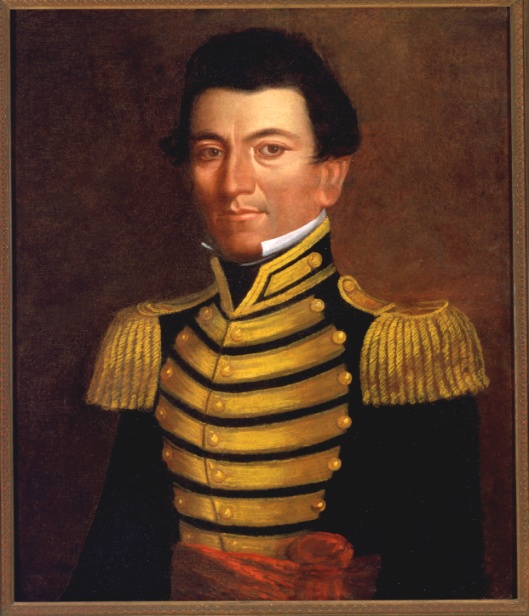 Juan Nepomucena Seguin (CHA #1989.96) was born in San Antonio on October 27, 1806. A friend of Anglo-Americans coming to Texas, he opposed Antonio Lopez de Santa Anna and recruited volunteers against Mexico in the fall of 1835. He and his recruits met Stephen F. Austin in October, fought with James Bowie in the battle of Concepcion, and was active in the siege of Bexar in December. In January he became a captain in the cavalry with orders to report to William B. Travis in San Antonio. He escaped Travis' fate at the Alamo only because he was sent through the Mexican lines with a plea for reinforcements. He later fought in the Battle of San Jacinto with his men and was promoted to lieutenant colonel with orders to take over the military government of San Antonio until the civil government could be restored. He served in the Texas Senate in 1838 where he worked for friendly relations between Mexican-Texans and Anglo-Texans. He was elected mayor of San Antonio in January of 1841 but resigned in April of 1842 amidst allegations of being a traitor for Mexico. He fled to Mexico and was forced to choose between prison and serving in the Mexican Army under Santa Anna. After the signing of the Treaty of Guadalupe Hidalgo in 1848, Seguin was granted permission to return to Texas. He died in Nuevo Laredo in 1889.  Jeff Wright, ca. 1838, Oil on canvas. 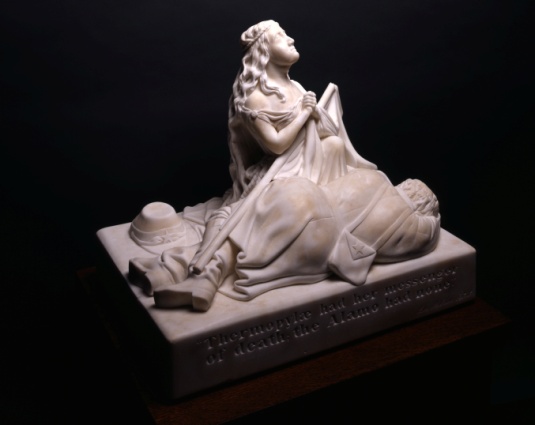 The Alamo Sculpture (CHA #1994.25) depicts a woman with clasped hands kneeling over a fallen Texan soldier with the caption "Thermopylae had her messenger of death; the Alamo had none." This phrase undoubtedly was coined from either the first or second Alamo Monuments, which commemorate the fall of the great San Antonio mission in 1836. The earlier monument stood in the vestibule of the first Capitol located at Capitol square. It eventually was destroyed when the first Capitol burned in 1881. Made from stones from the Alamo, the quote on the first monument read "Thermopylae had her messenger of defeat—the Alamo had none." The inscription on the second monument, built in 1891 on the grounds of the present Capitol, was changed slightly to read "Thermopylae had her messenger of death; the Alamo had none."  General Thomas Jefferson Green, whose portrait hangs on the railing of the book stacks along the south wall of the Legislative Reference Library, was the author of the original inscription according to Col. Guy M. Bryan, nephew of Stephen F. Austin. According to Bryan, the authorship of the phrase was freely discussed at a banquet in Galveston during the years of the Texas Republic. At that time it was said that Gen. Green dictated the phrase to the artist responsible for the first Alamo Monument's creation.  Lee Malone, ca. 1898, Marble. 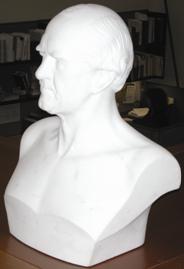 Sam Houston (CHA #1994.24) was an accomplished statesman even before stepping foot on Texas soil. A former United States Congressman and Tennessee Governor, he led the Texas army to victory at San Jacinto and became the first president of the Texas Republic, serving two non-sequential terms. Later as governor, Houston was opposed to the secession of Texas. On February 23, 1861, the Secession Convention declared the office of governor vacant and Lt. Governor Clark was made governor. Houston died in July of 1863. This bust appears in a ca. 1915 photograph of the library; it was placed in approximately the same location once the restoration of the library was complete.  J. O'Brien, 19th Century, Marble.