This week is National Library Week. Across the U.S., libraries will be celebrating their role as valuable information service providers to the community.  As our way of celebrating, we've provided a little LRL history below. The LRL is proud to serve members of the Texas Legislature, state agencies, and the public.
The Legislative Reference Library's current location on the second floor of the State Capitol has been in continuous use as a library since 1889. Designated a library in the original architectural plans for the Capitol, the space was first occupied by the Texas Supreme Court Library, and later, in 1907, by the State Library, which in 1909 began offering "legislative reference and information" to the Legislature. In 1962, the State Library moved into its own building to the east of the Capitol, and in 1969, the Legislative Reference Library became an independent legislative agency.

The LRL continues to serve members of the Texas Legislature from its location in the north wing of the Capitol between the House and Senate chambers. As part of the 1990s Capitol renovation, the library was identified as a significant space within the Capitol for its historical and architectural importance, and was selected to receive an adaptive historical room treatment. The library is open to the public, so please drop by and visit us during National Library Week or any time you are in the area. 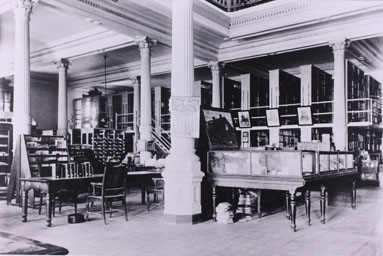 The State Library, c. 1915.
Photo courtesy of the Texas State Preservation Board.