LRL Home - Points of Interest - In the Ring with Senator A.R. "Babe" Schwartz

In the Ring with Senator A.R. "Babe" Schwartz

posted by TexasLRL in Members of the Legislature, Texas Treasures

This is the first installment in our new series, "Texas Treasures," highlighting some of the men and women who have served in the Texas Legislature.
Sen. Babe Schwartz can still pack a punch. On July 17, the former senator will celebrate his 90th birthday, and he shows no signs of throwing in the towel. Born on Galveston Island in 1926, Schwartz represented his home county in the Texas House of Representatives from 1955-1959, and in the Texas Senate from 1960-1981. He remains active in the Texas legislative community today as a lobbyist.
Known for his "stinging, colorful oratory," Senator Schwartz landed more than a few verbal punches during his service in the Legislature. In fact, he gained such a reputation for enjoying a good fight that at one point, Lt. Governor Hobby gave Schwartz a pair of boxing gloves (shown below) after one of his debates with another member. The gloves are now a prized part of the senator's interesting collection of memorabilia.
Senator Schwartz has always been a bit of a brawler, especially when it comes to causes and people he cares about. Fortunately for the citizens of Texas, protecting our coastal resources is one of the things he cares most about. One of the senator's most significant legislative accomplishments was passage of the Coastal Public Lands Management Act of 1973, which made Texas a leader in coastal preservation.
After a career of advocating for Texas beaches and ensuring public access to them, it is  fitting that the city of Galveston would recognize Senator Schwartz' legacy by naming a new beach in his honor. Babes's Beach, formerly a forgotten stretch of submerged shoreline located west of 61st street, is now fully restored and is "about as pretty as it gets," according to John Schwartz, the senator's son. "And yes, you can expect a bunch of tourists to come there looking for the babes. That's probably part of the idea."
Senator Schwartz and his wife Marilyn, a champion of Texas beaches in her own right, were joined at the beach dedication ceremony on May 25th, by a large group of family and friends. Standing on the strand accepting the honor, Schwartz spoke of his love for the island. "I won the lottery being born in Galveston."
And Galveston, one could argue, hit the jackpot when the citizens chose Babe Schwartz to represent them in the Legislature. Without Babe in their corner, the island -- and the entire Texas coast -- would not be what it is today.
Thank you and Happy Birthday, Senator Schwartz! We think you are the greatest!
(Pictured below: Senator Schwartz and his wife Marilyn attended the beach dedication ceremony with their family.  Photo courtesy of Senator Schwartz.   On the right, Sen. Schwartz wears his boxing glove given to him by Lt. Governor Hobby.) 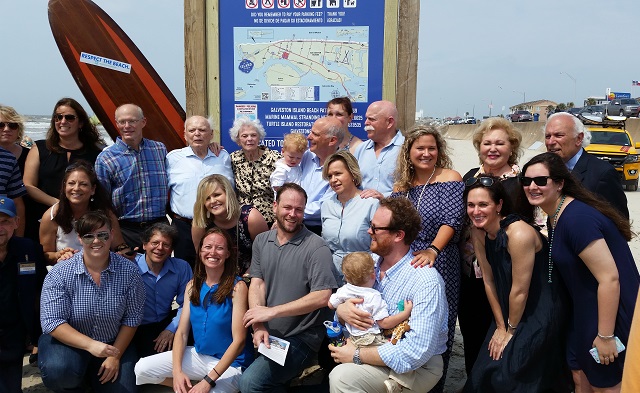 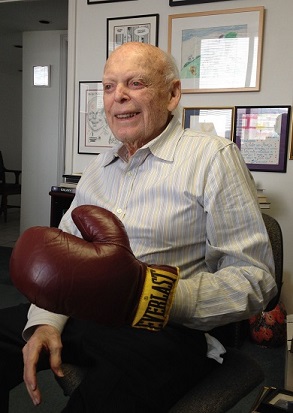 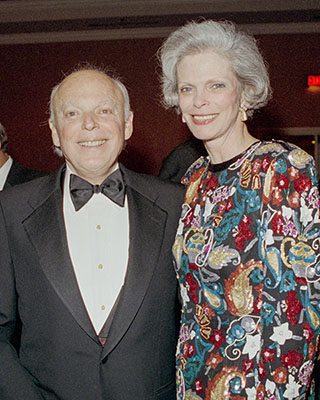 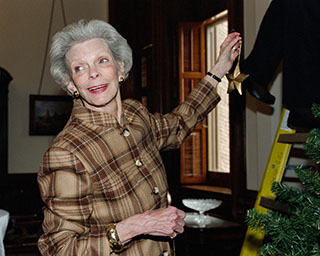 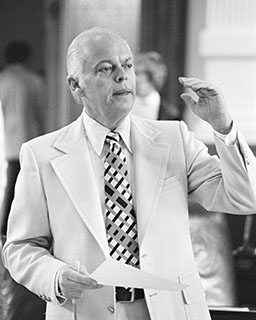 (Photos of Senator and Mrs. Schwartz courtesy of the Texas Senate.)