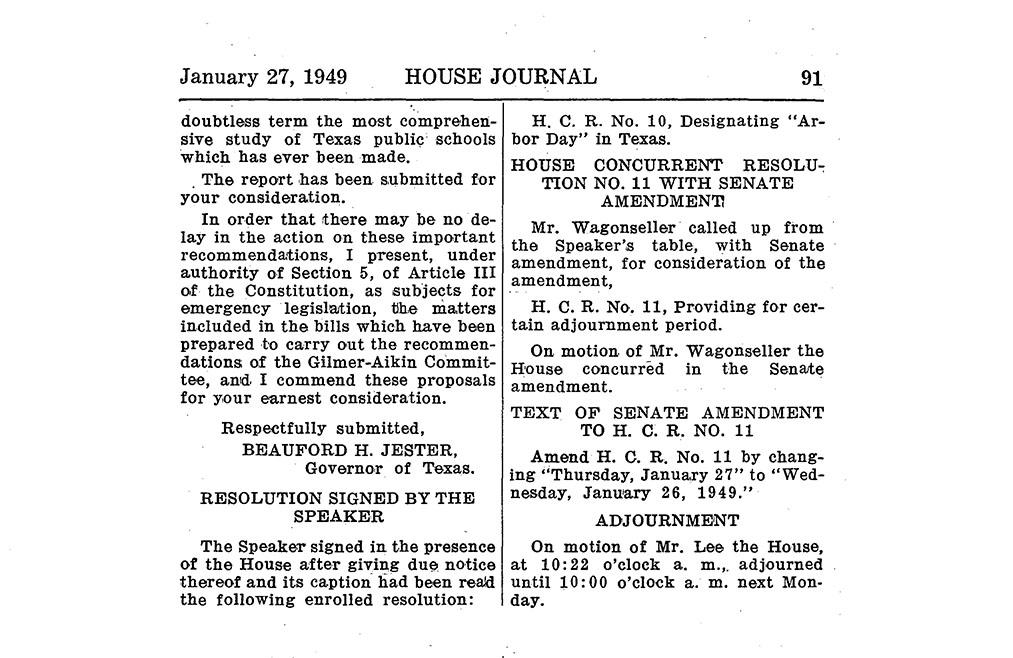 Did you know that the Texas Constitution prohibits the House and Senate from passing legislation during the first 60 days of a regular legislative session? That is—unless either chamber suspends the rule by a vote of four-fifths of its membership, or if the legislation is an appropriation or other matter declared by the governor to be an emergency. This is part of the order of business set out by Article 3, Section 5, of the Texas Constitution. What constitutes an "emergency"? Anything that the governor wants to be prioritized in that year's session, or any issue the governor wants to support. If a bill is related to a governor's emergency item, members can decide to vote on it earlier in the session.
To take best advantage of that 60-day head start permitted by the emergency designation, the items typically are submitted early in session. Emergency items are ideally matters that could be addressed in the first few months of session. However, the governor can submit emergency items at any time throughout the session. Due to a prohibition in the house rules against considering other bills making an appropriation before the general appropriations bill has finally passed, emergency items submitted by the governor after the first 60 days of a regular session typically relate to appropriations for specific purposes. For example, Gov. William P. Clements submitted two emergency appropriation matters to the 66th Legislature following major tornadoes in Wichita Falls and the surrounding area (filed on April 26, 1979, and May 2, 1979).
Recent emergency matters include legislation relating to transportation, abortion, wildfire damage and recovery, and much more. You can explore a listing of emergency items dating from the 38th session (1923) to the 84th (2015) via the library's governors database.
Images:
House Journal, 51st R.S. (1949): Governors have used emergency items in different ways over the years, resulting in some submitting items more frequently than others. Govs. Beauford H. Jester and William J. Clements both submitted about 50 emergency items, but Jester spent just two years in office (an average of 25 items/year) and Clements served for a total of eight years (an average of 6.25 items/year). In this 1949 emergency item, Jester hails the work of the Gilmer-Aikin Committee and encourages the Legislature to support its educational reform recommendations. Senate Journal, 43rd R.S. (1933): In March 1933, Gov. Miriam (Ma) Ferguson issued a general proclamation/legislative message declaring a bank moratorium in an attempt to address the growing financial problems of the Great Depression. Her decree was sustained a few days later by President Franklin D. Roosevelt's declaration of a national bank holiday (with federal guidelines).
Message from the Office of the Governor to the 84th R.S. (2015): The governor's emergency items are published in the House and Senate Journals, and the governors' messages, press releases, and other materials are collected by the library. Many of these documents (such as Gov. Abbott's 2015 item on transportation) also are available online in our House and Senate Journals and Texas governors database. 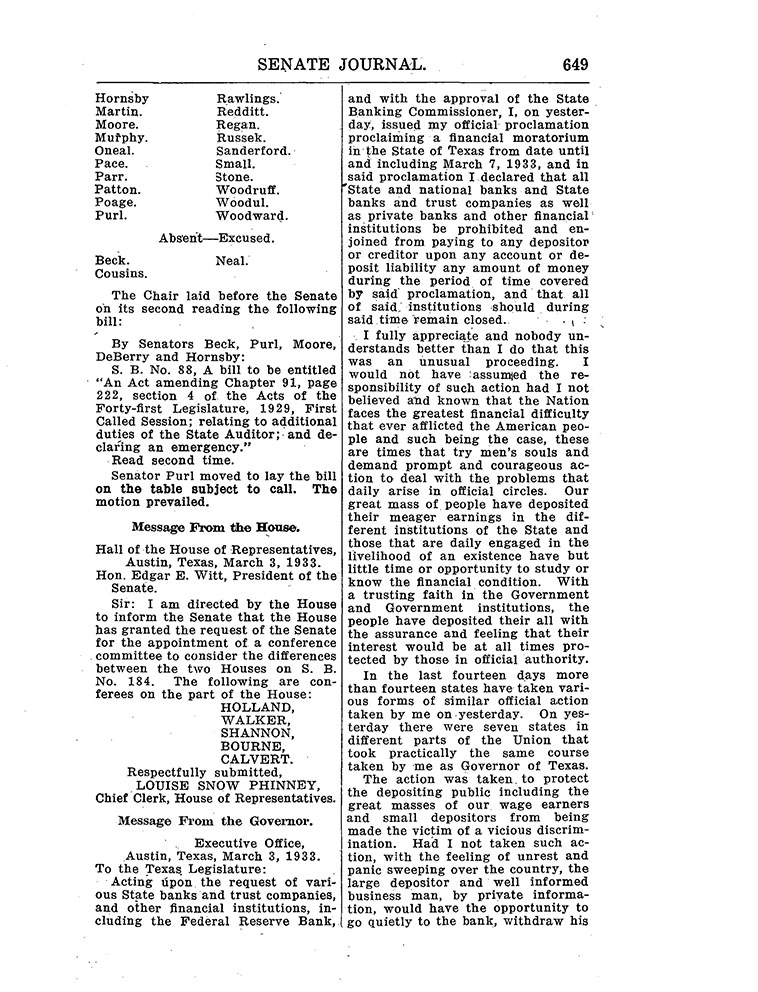 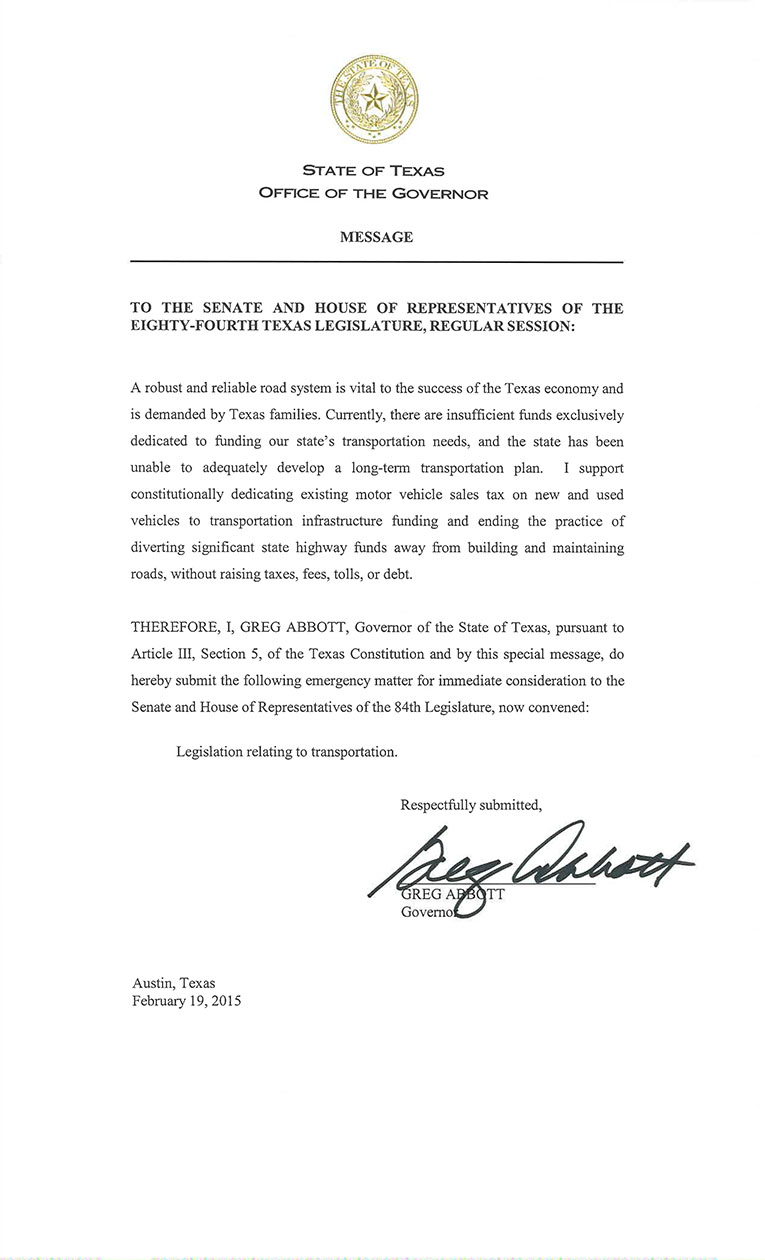