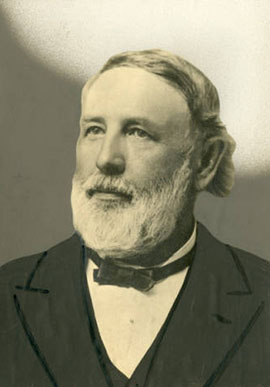 Every now and then, LRL patrons will ask a question like, "who is Vernon and why is his name on the Texas statutes?" To which we say, "good question!" People often conduct legislative history research with a tight deadline that doesn't leave much time for musing over the origins of the sources, but it can be instructive to learn about who has worked to compile Texas' laws over the years. In our occasional "Who Is…" series, we'll take a look at some of the important resources for studying Texas legislative history and the publishers, lawyers, and legal scholars behind them. Check out our previous entry on Vernon; in this post, we're focusing on John Sayles.
John Sayles was a prolific legal mind for Texas, producing more than 15 works on Texas law. Most notably, he prepared what can be considered the last important unofficial compilation of Texas laws, Sayles' Early Laws of Texas. Additionally, the state's first set of annotated statutes were edited by John and his son, Henry, in 1888.[1] Father and son kept these statutes and annotations up to date until the 1911 revision, when the Vernon Law Book Company bought the copyright.
Born in Ithaca, New York, in 1825, Sayles taught in various schools as a young man to finance his education. He earned his bachelor of arts degree from Hamilton College in New York in 1845, then moved to Texas, seeking opportunity in the country's newest state. He taught school in Brenham, read law, and was admitted to the Texas Bar in 1846. He purchased a plantation and in 1849, married Mary Elizabeth Gillespie. They went on to have six children.[2] According to the U.S. Eighth Census in 1860, Sayles was reported as holding 44 enslaved people, $15,000 in real property, and $61,000 in personal property[3]—which, taking inflation into account, would have made him a millionaire by today's standards. 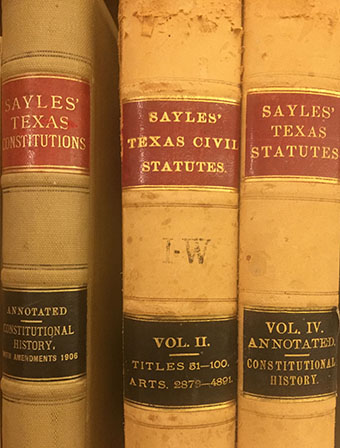 From 1855-1856, Sayles represented Washington County in the House of Representatives of the 6th Legislature.[4] Historian Ralph A. Wooster identified Sayles as a member of the Texas Know-Nothing party.[5] Following Sayles' term in the legislature, he taught at Baylor University in its newly formed law department from 1857-1860. He also started his publishing work, with such titles as A Treatise on the Practice of the District and Supreme Courts of the State of Texas (1858), which the Handbook of Texas describes as a "forerunner of special studies on probate law, justice of the peace jurisdiction, business transactions, and Masonic jurisprudence."[6]
Baylor's law department became inactive when many male students and faculty, including Sayles, left to join Confederate troops in the Civil War. He served in the 4th Infantry Regiment as a Colonel, then attained the rank of Brigadier General and served with Brigade No. 23.
When the war was over, Sayles resumed his legal practice and teaching at Baylor. He also continued to compile and publish Texas law, including various editions of the Texas Constitution. The HathiTrust makes available digital versions of many of his works.
Users of Sayles' texts, then and now, note that he does not discuss all of the Early Laws of Texas—he omits many statutes. His interest seems to fall primarily in the land and colonization laws of Spain and Mexico, and so the publication is most useful for land-title research. Among other information, Sayles provides a glossary of terms used in the old surveys and land grants and a table of land measures, which can be very helpful to researchers unfamiliar with the jargon of the day and industry.[7]
John moved to Abilene around 1886 with his son, Henry, where they practiced as Sayles & Sayles and collaborated on legal publications. John died in 1897, but Henry continued the work of updating the annotated statutes until the Vernon company bought the copyright and took over the publication.[8]
Photograph of John Sayles courtesy of the Texas Jurists Collection, 1936-1992, Tarlton Law Library, Jamail Center for Legal Research. Photo of Sayles volumes at the Legislative Reference Library courtesy of LRL staff.
[1] "Legislation," rev. by Linda Gardner, A Reference Guide to Texas Law and Legal History, edited by Karl T. Gruben and James E. Hambleton, Austin, TX: Butterworth Legal Publishers, 1987, pp. 16-17.
[2] Handbook of Texas Online, "Sayles, John," accessed August 29, 2017, http://www.tshaonline.org/handbook/online/articles/fsa42.
[3] Ralph A. Wooster, "An Analysis of the Texas Know Nothings," The Southwestern Historical Quarterly 70, July 1966-April 1967, Texas State Historical Association. (https://texashistory.unt.edu/ark:/67531/metapth101199/: accessed August 29, 2017), University of North Texas Libraries, The Portal to Texas History, texashistory.unt.edu; crediting Texas State Historical Association, p. 446.
[4] "John Sayles," Texas Legislators: Past & Present, Legislative Reference Library of Texas, accessed August 29, 2017, http://www.lrl.texas.gov/legeLeaders/members/memberDisplay.cfm?memberID=5202.
[5] Wooster, p. 416.
[6] Handbook of Texas Online.
[7] "Legislation," p. 16
[8] Handbook of Texas Online.