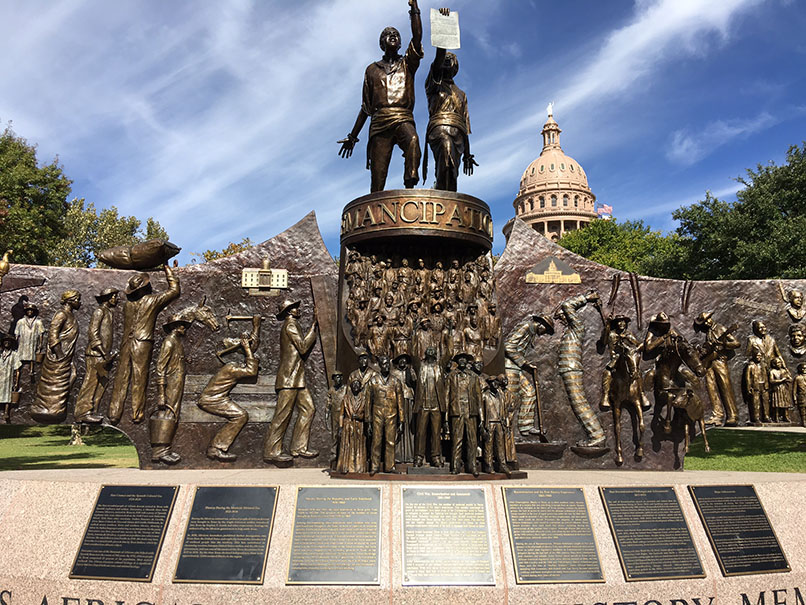 The monument has a legislative history that goes back over 25 years. In 1991, Sen. Rodney Ellis and Rep. Al Edwards passed SCR 49, 72R, directing the State Preservation Board to explore opportunities to revere and honor some of the outstanding historical figures from all ethnic cultures with regard to new monuments on the Capitol grounds. In the following session in 1993, Ellis and Rep. Garnet Coleman passed SCR 97, 73R, directing the State Preservation Board to include in its long-range master plan for the Capitol grounds a permanent monument in tribute to African American and Mexican American Texans.
Later, in 1997, Rep. Al Edwards and Sen. Jerry Patterson passed HB 1216, 75R. The bill created the Texas Emancipation Juneteenth Cultural and Historical Commission and gave it a mission to collect and commemorate the history of Juneteenth, the day that marks the arrival of President Lincoln's Emancipation Proclamation in Texas. At that time, Edwards envisioned the monument as an Emancipation Juneteenth memorial monument.
The 1997 bill was followed by several more legislative measures:
•  HB 1865, 76R, by Edwards and Sen. Royce West, Relating to the operations of the Texas Emancipation Juneteenth Cultural and Historical Commission.
•  HB 1368, 76R, by Edwards and Sen. Chris Harris, Relating to the site of the Emancipation Juneteenth memorial monument.
•  HCR 176, 81R, by Edwards and Sen. Tommy Williams, Expressing continued support for the establishment of a Juneteenth memorial monument on the grounds of the State Capitol at the location previously approved by the State Preservation Board.
In 2011, during the 82nd Regular Session, legislators expanded the scope of the monument to provide a broader representation of African American history in Texas. The bill that made these changes was SB 1928, 82R (by Ellis and Rep. Alma Allen), relating to an African American Texans memorial monument on the Capitol grounds; SCR 51, 82R (by Ellis and Allen) expressed the legislature's support for this shift in the monument's subject matter. The dedication program includes lists of those who served on the Texas African American History Memorial Committee, donors, and others who have been involved with the project.
The monument features notable Texas African Americans including Estevanico de Dorantes (the first African to set foot on Texas soil), Hendrick Arnold (a special agent in the Battle of the Republic and in the Indian wars), and Sam McCullough (one of the first casualties of the Texas Revolution). Emancipation is the central core element of the memorial, featuring a 9-foot-high image of a male and female slave having broken the bonds of slavery, dedicated to the 182,500 slaves that were freed on June 19, 1865. Also illustrated are the slave experience, from arrival to slaves' work in the fields and industry, and depictions of Black Texans' contributions to the state, from the Buffalo Soldiers to musicians to astronauts. To learn more about the monument, please see https://tspb.texas.gov/prop/tcg/tcg-monuments/21_african_american_history/index.html.