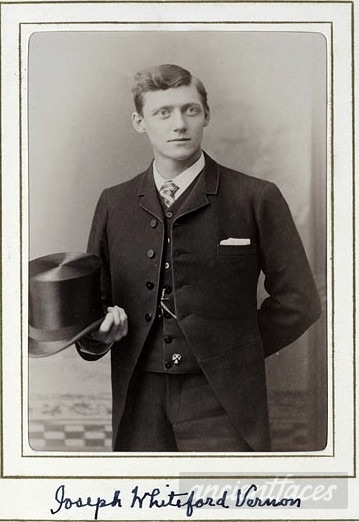 Every now and then, LRL patrons will ask, "who is Vernon and why is his name on the Texas statutes?" To which we say, "good question!" People often conduct legislative history research with a tight deadline that doesn't leave much time for musing over the origins of the sources, but it can be instructive to learn about who has worked to compile Texas' laws over the years. In our occasional "Who Is…" series, we'll take a look at some of the important resources for studying Texas legislative history and the publishers, lawyers, and legal scholars behind them.
Many of the people we've come to associate with Texas law book publications were Texans or resided in Texas at some point. Despite having his name on the statutes we use today, Joseph W. Vernon is not one of them. Born in Wisconsin in 1860, Vernon graduated from the University of Wisconsin in 1885 and moved to Kansas City, Missouri in 1886. In September 1902, Vernon organized the Vernon Law Book Company.[1] 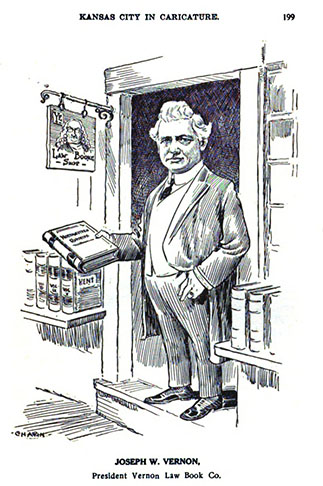 Texas' first set of annotated statutes were published by John and Henry Sayles in 1888. (More on the Sayles in a future post.) Before their 1911 revision, the copyright was bought by Vernon, and in 1914, an edition called Vernon's Sayles was produced. The Sayles name was dropped with the 1925 edition, which was the last official edition of the Texas statutes.[2] Vernon was noted as an active member of the Kansas City community before he died in 1928 at the age of 68.[3]
Vernon Law Book Company published an unannotated Centennial Edition in 1936, and another unannotated compilation in 1948.[4] In 1969, West Publishing took over the company and its operations, and Vernon's compilations were certified by the Texas Secretary of State.[5] Despite changes in publisher (which is now Thomson Reuters), the statutes volumes are still familiarly known as Vernon's, or as the Black Statutes (so called because of their black binding).
Vernon's Texas Statutes and Codes Annotated are a critical first stop when conducting legislative history research. Annotations provide background on revisions to sections of code, references to law reviews, attorney general opinions, and more.
In the course of legal research, you may also come across the "Red Statutes," unannotated biennial supplements which were published from 1948 through 1974, with a supplement for each legislature; and their successors, the  "Green Statutes," also unannotated statutes that were produced in two forms: hardback and paperbacks filed in a binder.
You can see the current statute publication dates for each bound volume of Vernon's Statutes here. In 1963, the Texas Legislature passed legislation requiring the Texas Legislative Council to make a complete, non-substantive revision of Texas statutes. When the program is complete, all general and permanent statutes will be included in one of 27 codes. Look on our statutory revision page to see a list of these codes, along with links to statutory revision documents. 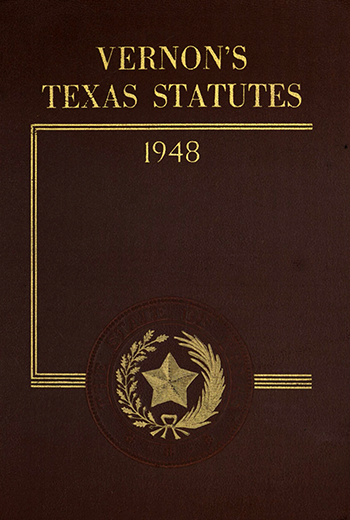 Texas does not currently have an official print code (as in, officially designated by the state or with a copyright held by the state), but Vernon's Texas Statutes and Codes Annotated are essentially held as the "quasi-official" statutes.[6] The General and Special Laws of Texas, also known as the "session laws," are the official source and should be used for citation purposes. Vernon's may not have Texas origins, but its volumes are indispensable resources in the study of Texas legislative history.