Exploring the Texas Album of the Eighth Legislature

posted by TexasLRL in Texas history, Members of the Legislature 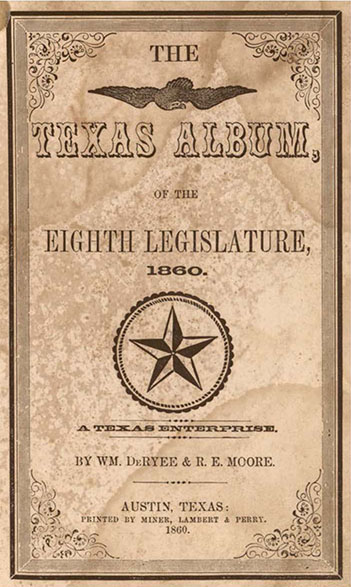 Locating photos of Texas legislators from the pre-Civil War period is no easy task. The composites that currently decorate the Capitol's ground floor halls were not yet a tradition, and photography was a relatively new technology.
That rarity means the Legislative Reference Library was especially pleased to learn about The Texas Album of the Eighth Legislature. The album is an early attempt to document all of the state's officials, created by a traveling photographer, William DeRyee and his business partner, R.E. Moore. DeRyee took individual albumen portraits of the Eighth Legislature (1860), along with Governors Hardin R. Runnels and Sam Houston, Lieutenant Governor Edward Clark, and Speaker Marion DeKalb Taylor. A short biography and the counties the member represented accompany many of the portraits. Most of the biographies are the usual recitations of the member's family and work, but Rep. George McKnight's stands out—his bio page includes an original poem, "The Wanderer," musing on the loss of his parents and siblings.
Original copies of the album are held by the Texas State Library and Archives Commission (TSLAC), the Bancroft Library at University of California-Berkeley, and the Dolph Briscoe Center for American History. Looking at the different copies, you can see evidence of their prior owners' use. In the TSLAC edition, someone scribbled over the faces of some of the officials. They also wrote little notes in the margins, like—on Sam Houston's photo page—"Old Uncle Sam father of Texas — Sam 72 years old."
Many of the photos in the Bancroft copy have faded, and someone attempted to recreate some of the disappearing eyes, mouths, and other features—not to good effect. (Trying to pencil in eyes and noses on a photo never works well.) In some instances where the photo was missing all together, a previous owner attempted penciled-in portraits. Let us say that these portraits are more cartoonish than realistic. See page 237's cartoon of Rep. L.B. Camp—who has a perfectly respectable portrait in TSLAC's copy—as one example, and scroll to the end of our digital album to check out more caricatures/doodles. (Some of the drawings at the end of the album appear to be women; however, there were no biographies to go with them.) The photos and the bios in Bancroft's album are also jumbled up: Sam Houston's photo is almost 350 pages after his biography.
In an effort to pull the best of the originals together, the LRL has compiled a digital album and integrated photos and information from it into our Texas Legislators: Past & Present database, where you can view information about legislators in Texas from 1846 through the present.
Interesting historical side note: Following the 1860 publication of The Texas Album of the Eighth Legislature, photographer William DeRyee continued his photography business a little longer, but the Confederacy saw another use for his chemistry background. He was appointed state chemist and put in charge of the Texas Percussion Cap Manufactory. He also worked with the Confederate Nitre and Mining Bureau. He made various innovations and developments in explosives, but the Confederacy lacked well-trained chemists to assist him with his work. Following the Civil War, he opened a drugstore in Corpus Christi and developed a treatment of chlorine water with creosote as an antiseptic that helped alleviate a yellow fever epidemic. His son, Charles DeRyee, is credited with first documenting the presence of the boll weevil in Texas.