“A Texas Treasure: A.R. 'Babe' Schwartz” on Display at LRL

posted by TexasLRL in LRL news, Members of the Legislature, Texas Treasures 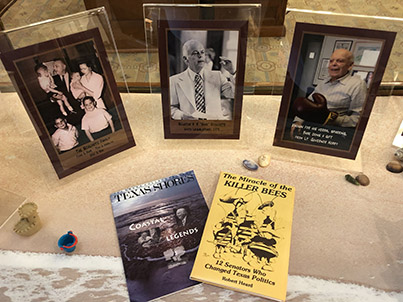 "Failure to have the views of the minority represented is failure to have a democracy.  The minority side of the house is seldom comfortable. You can become unpopular by just jogging people's conscience. If you keep telling them they know what is right, but aren't doing it, then you get to be a thorn under their saddle." – Babe Schwartz
Sen. Babe Schwartz fought for what mattered to him throughout his career, and what a career it has been! You can learn more about Sen. Schwartz’s life and contributions in our exhibit, “A Texas Treasure: A.R. 'Babe' Schwartz.”
Born in 1926 to Russian immigrant parents, Aaron Robert “Babe” Schwartz grew up as a self-described “beach bum” on Galveston Island. After graduating from Ball High School, he proudly served in the U.S. Navy from 1944–1946, and then in the U.S. Air Force Reserve from 1948–1953. Schwartz graduated from Texas A&M in 1948 and earned his law degree at the University of Texas in 1951. Later that year, he married wife Marilyn; they went on to have four sons and many grandchildren and great-grandchildren.
While in law school, Schwartz worked for the chief clerk's office in the Texas House of Representatives and in the Texas Legislative Council. He returned to his hometown to serve as a prosecutor in the Galveston County attorney’s office for a few years, but he was eager to run for office. Schwartz served as a representative from 1955–1959, and then as a senator from 1960–1981.
"I always felt it necessary to be a little better educated, a little better prepared, a little better briefed than my opposition." – Babe Schwartz
A thread that runs throughout Sen. Schwartz’s life is his affinity for the Texas coast. One of his first jobs—at age 11—was on the beach, renting beach chairs, umbrellas, and other shoreline gear. While serving in the legislature, he was instrumental in the creation of the 1959 Open Beaches Act and the passage of the Coastal Public Lands Management Act of 1973. He chaired multiple committees, many relating to beaches and the coast. After his terms in the legislature, Schwartz went on to serve as a lobbyist, often for environmental causes, and he taught law school courses including Ocean and Coastal Law. In honor of these contributions, "Babe's Beach," a stretch of shoreline west of 61st Street in Galveston, was dedicated in May 2016. 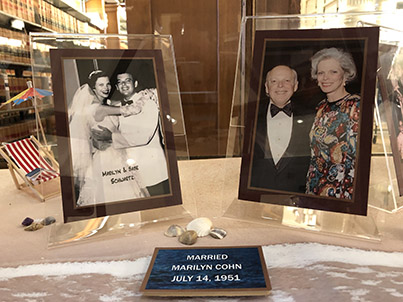 As his quotations above suggest, Sen. Schwartz also made quite a name for himself as a fighter who was willing and prepared to go nose-to-nose in the chambers. He participated in at least seven filibusters. Lt. Governor Bill Hobby even gave Schwartz a pair of boxing gloves after one of his debates.
"There are few people in recent Texas politics who have had as much impact as Babe has. He has provided a rallying post on bill after bill. He has been the real conscience of the Senate on any number of bad appointments over the years. He's experienced and perceptive and he can frequently catch a bad bill no one else sees. He has no reluctance to stand up and take on any issue that he perceives to be adverse to the public interest. His departure leaves a great void that will be difficult to fill." – U.S. Rep. Lloyd Doggett, who served in the 63rd, 64th, and 65th Texas Legislatures with Schwartz
Visit the LRL to see some of Sen. Schwartz’s memorabilia and to learn more about his life and career.
Sen. Schwartz passed away on August 10, 2018, at age 92. We will miss you, Babe!