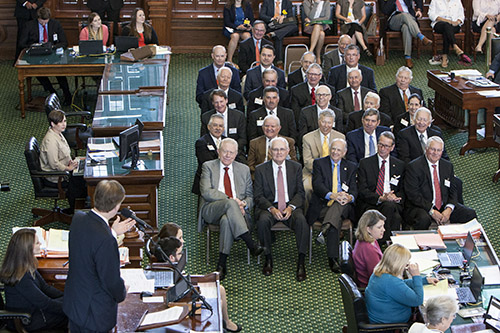 The Texas Senate will be celebrating Former Members Day on Thursday, April 4. This event is an opportunity to recognize those who have served in the Texas Senate.

This time-honored tradition will include a dinner on April 3, and a reception the following morning. Lieutenant Governor Dan Patrick and current members of the Texas Senate will recognize former members on the Senate floor on April 4.

In addition, the names of senators who have died since the previous Former Members Day will be read on the floor and copies of the Senate's biennial publication, A State of Remembrance, will be distributed. 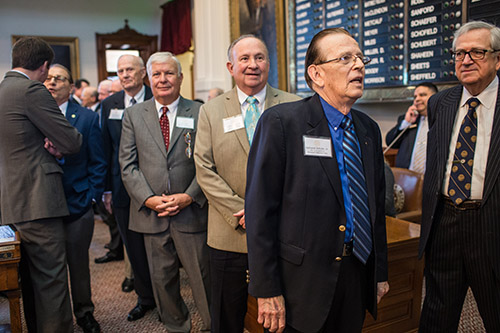 The Texas House of Representatives will be celebrating Speaker's Reunion Day on Friday, April 5. This time-honored tradition — which dates back to 1876 — was originally known as Speaker's Day.

In 1995, HB 1527, 74th Legislature, became law, officially designating a day to honor all former members of the Texas House of Representatives; it also changed the name to Speaker's Reunion Day. Now, this biennial event continues to be an opportunity for all current and former members to congregate and celebrate their service to the State of Texas.

This year, Speaker Dennis Bonnen has invited all former House members for breakfast at the Capitol, an introduction on the House floor, and a barbecue lunch on the Capitol grounds. Members who served in the House back to the 1950s will be attending the event.
Texas Legislators: Past & Present
For information about current and former members of the Texas Senate and the Texas House of Representatives, search the Texas Legislators: Past and Present database.
The library also has a complete list of lieutenant governors and speakers on our website.