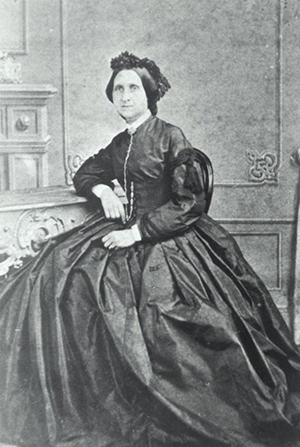 During the 86th Regular Session (2019), Senator Judith Zaffirini authored Senate Resolution 163 designating July 21, 2020, as First Lady Frances Cox Henderson Bicentennial Day in Texas.
Born in Philadelphia, Pennsylvania, on July 21, 1820, Frances learned to speak at least eighteen languages, excelled in math, became an accomplished musician, and wrote and translated short stories. She met James Pinckney Henderson in Paris while he was serving as envoy to Great Britain and France from the Republic of Texas. They married in London, England, in 1839. Upon returning to Texas, Frances studied to become well versed in law in order to carry on her husband's law practice when he was away on state business.
She became the first First Lady of Texas when her husband was elected the first Governor of the State of Texas, serving from 1846 to 1847. One of her contributions to Texas was to establish Episcopal churches in San Augustine, Rusk, Palestine, Marshall, and Nacogdoches. It was during her work with the church that she became the first woman to address the clergy of the diocese in 1855. In 1857, J. Pinckney Henderson was appointed to fill the seat of United States Senator Thomas J. Rusk, taking the Henderson family to Washington D.C.
Following her husband's death in 1858, Frances moved to New Jersey, where she spent her remaining years as a community leader. She died in her daughter’s home on January 25, 1897, and is buried in East Orange, New Jersey. Frances' contributions to Texas are recognized with a memorial marker on the back of her husband's headstone in the Texas State Cemetery.
Senate Resolution 163 encourages all Texans to honor the memory of the Lone Star State’s first First Lady, Frances Cox Henderson.
Photograph of Frances Cox Henderson courtesy of findagrave.com.