Juneteenth is a celebration of the emancipation of enslaved African Americans in Texas, and has been an official Texas holiday since 1979.

On June 19, 1865, Major General Gordon Granger arrived in Galveston to announce the end of slavery in Texas, almost two and a half years after President Abraham Lincoln issued the Emancipation Proclamation.

The Major General's announcement, General Order Number 3, reads as follows: "The people of Texas are informed that in accordance with a proclamation from the Executive of the United States, all slaves are free. This involves an absolute equality of personal rights and rights of property between former masters and slaves, and the connection heretofore existing between them becomes that between employer and hired labor. The freedmen are advised to remain quietly at their present homes, and work for wages. They are informed that they will not be allowed to collect at military posts and that they will not be supported in idleness either there or elsewhere." 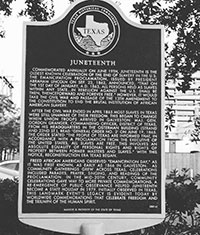 On July 22, 2021, the Texas Senate passed SR 19, 87th 1st C.S., recognizing Opal Lee, "the grandmother of Juneteenth," on the designation of Juneteenth as a national holiday.

Learn more about Juneteenth and the holiday's Texas origins in the Handbook of Texas Online.

You can also find more information about Juneteenth from the following resources: