Senate Bill 1457 of the 76th Regular Session (1999) designated July as Buffalo Soldiers Heritage Month in Texas. The bill, authored by Senator Royce West, coauthored by Senator Rodney Ellis, and sponsored by Representative Bob Hunter, amended Texas Government Code Section 662 by codifying Buffalo Soldiers Heritage Month. Prior to this legislation, Senator Dan Kubiak honored the Buffalo Soldiers with a Buffalo Soldier Heritage pilot program for at-risk youth with House Bill 2031, 74th Regular Session (1995).
On July 28th, 1866, the U.S. Army Reorganization Act authorized the formation of 30 new units, including two cavalry and four infantry regiments "which shall be composed of colored men." These men became known as "Buffalo Soldiers." There is no consensus on the origin of the Buffalo Soldier name, but a common theory is that it was bestowed upon these units of African Americans soldiers by the Cheyenne Native American tribes of the area. The actual Cheyenne translation that was given was "wild buffalo."
The Ninth and 10th Cavalry and the 24th and 25th Infantry regiments were stationed at Texas forts stretching from the Panhandle to the Valley. In addition to keeping the peace on the Western frontier, Buffalo Soldiers built roads, telegraph lines, and forts, and mapped vast portions of the Texas frontier. One group worked as some of the first park rangers in national parks. Additionally, the first black graduate of West Point, Lt. Henry Flipper, served with the 10th Cavalry in West Texas. 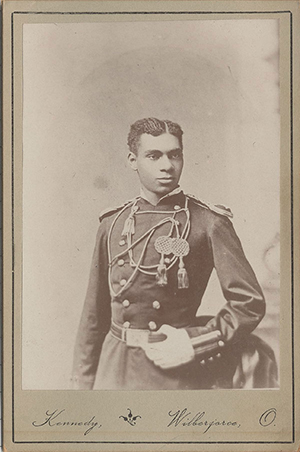